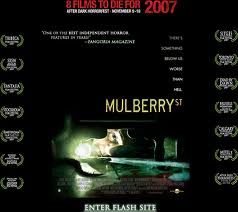 See the crummy neighborhood, its streets and alleys awash in sweaty, hustling, vibrant humanity.  Puerto Ricans, Italians, blacks, whites, all doing what they have to to get by. They live in a tableau of small but clean apartments with crappy plumbing, narrow hallways, and crumbling basements. The scene thusly set, the panic points that pop up in Mulberry Street seem natural, even organic. And panic does indeed pop up in the form of huge, surprisingly vicious rats that have a taste for warm human flesh.

That in itself might be frightening enough as the plot for a gritty, inner-city entropyfest, but things definitely take a turn for the worse, as bite victims start mutating into crazed, hairy, blood-thirsty varmints. Were-rats? Whatevs. Anyway, friends are now enemies, families are now food.

Speaking of families, Clutch (Nick Damici) is the protagonist, and he’s a goodhearted ex-boxer awaiting the return of his battle-scarred daughter from her tour in Iraq.  While he waits, he does a pretty good job of looking after the other tenants in his building when the unfortunates infected with rat rabies begin flipping their wigs.

Amidst the chaos and the killing, the assorted characters, including a drag queen, a middle-aged Italian guy and his father who totes his oxygen tank with him everywhere he goes, and a lonely single mom, all display surprising humanity and warmth, which isn’t easy when hordes of rabid rodent-thropes are trying to chow down on their asses.

It’s always a bonus when characters show that they have some grit and integrity rather than succumb to the always-popular “every man for himself” option. Definitely a cut above the average.