The director of one of my favorite non-horror movies (Diner) hangs out his genre shingle in the found-footage eco-thriller The Bay.

Yep, Oscar-winning writer-director Barry Levinson, best-known for marquee attractions like Good Morning Vietnam, The Natural, and Rain Man, takes the no-name, low-budget road this time around, but still manages to scare the bejeebers out of me with a seemingly plausible environmental disaster scenario set in a small Chesapeake Bay community.

The story unfolds via video edited together from various sources, chiefly confiscated footage seized by government agents—after the fact. Former news station intern Donna Thompson (Kether Donohue) is interviewed on camera about a harrowing incident that has left her traumatized and paranoid.

The year is 2009 and the picturesque town of Claridge, Maryland is preparing for a festive Fourth of July weekend. (Considering the number of horrible things that happen to small towns during annual tourist-trap wingdings, I say we outlaw all community celebrations—forever!)

The assembled footage reveals that the polluted waters of the Chesapeake Bay are infested with parasites, now whimsically grown to the size of collies from steroids in the chicken manure dumped in the water from unscrupulous neighboring factory farms.

The nasty little critters infect the local water supply and cause the citizenry to boil over in gross, awful boils and blisters before the monstrous isopods grow to full size and chew themselves free of their human hosts.

The lion’s share of the blame for this catastrophic turn of events goes to Mayor Stockman (Frank Deal), a crooked, money grubbing shitheel who willfully ignores environmental regulations and dooms his community. Needless to say, he will not be getting my vote come re-election time.

If you’ve seen The Blair Witch Project you’ll be fairly familiar with the dramatic structure. The stitched-together scenes evolve from mundane and curious bits of exposition to choppy, nightmarish fragments, that show an all-American town overrun by fast-moving alien predators.

Fans of Discovery Channel fair like The Monsters Inside Me will no doubt be charmed and delighted as the hideous parasites soon have the run of the place requiring the feds to step in and hush up the whole affair.

It’s no masterpiece, but Levinson and writer Michael Wallach definitely succeed in creating an intense, effective piece of enviro-horror that doesn’t waste any time, thanks to a minimum of preachiness and pretense with “the message.” Recommended. 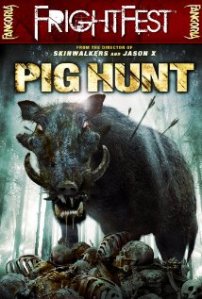 Now this is more like it! Plenty of weird shit as far as the eye can see.

Blood sure, but even more, carnage. There’s enough carnage in Pig Hunt to fill Carnagie Hall. Yeah, I know.

But since the movie is named Pig Hunt, probably not all that mysterious. Look, just play along!

The gang goes through all the familiar check points (or plot points, if you prefer): They stop at a backwoods general store for directions—this one run by blues harmonica great Charlie Musselwhite, who gives them dire warnings—and encounter a hostile clan of indiginous rurals, a rattlesnake, and a van containing a muscular black gentlemen with a hippie-chick entourage, part of a nearby weed-growing commune.

Somewhere in here, we discover that John grew up around these parts, and that he’s actually a skilled hunter and woodsman, unlike his three hopelessly doomed friends.

Some hillbilly acquaintances of John come a-visiting, and they all decide to go hunting for “the Ripper”, a legendary 3,000 pound killer hog that most likely wasted John’s uncle—and the train goes off the rails, big time.

This sounds like it has all the makings of Troma Team farce, but somehow Pig Hunt avoids broad comedic pitfalls, and plays it somewhat straight.

The Andersons actually have the guts to develop the characters beyond stereotype to the point that I actually felt sorry for John’s friend Quincy (Trevor Bullock), a gentle chef who accompanies his more macho comrades. He and his beloved dog Wolfgang come to a bad end that they really didn’t deserve (though, to be fair, Quincy has no more business being outside the urban landscape than Ned Beatty does).

Collateral damage, as it turns out.

What the filmmakers demonstrate most effectively in Pig Hunt is that it’s the various human tribes (duh!) that wreak the most havoc, and that in order to survive, you have to become the biggest monster of all.

Hell, the giant pig is almost an afterthought until the one-hour point in the film. Bonus: The music is by Primus bassist Les Claypool, who also doubles as Preacher, one of the bloodthirsty hillbillies.

I love that shit.