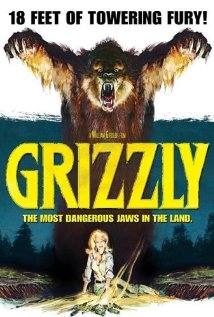 The consensus opinion on writer-director Karl Mueller’s feature-length debut is that it has all the makings of a first-class frightener—but falls apart at the end, like a child’s first soufflé. I think the finale boils down to two possibilities, neither of which ruined the experience, in my opinion. In Mr. Jones, Mueller has created a vivid, found-footage nightmare that runs its course effectively, before running smack-dab into an ambiguous conclusion. Ambiguous, in this instance, does not mean half-assed or inexplicable.

Nutshell: An attractive couple severs its ties with civilization and sets up housekeeping in a remote mountainous locale (The Sierra Nevada range, if I had to guess). Scott (Jon Foster) is intent on making a nature documentary, that fizzles out before it starts. Girlfriend Penny (Sarah Jones) is worried about her partner, who’s gone off his medication and lost interest in the film project that would undoubtedly make them both rich and famous. (Add sarcasm font to the preceding statement.)

They soon become aware of a mysterious neighbor who gambols around in a hooded cloak, and Penny deduces that it is none other than Mr. Jones, a reclusive artist famous for creating unsettling life-sized scarecrows that got shipped out to seemingly random recipients around the world. And now their documentary has a new subject!

As the couple investigates Mr. Jones further, it becomes apparent that the artist is some sort of sorcerer or shaman who’s guarding the borders where various dimensions overlap. Penny’s convinced he’s benign, but Scott isn’t so sure. During a massive storm, all hell breaks loose and the fledgling filmmakers lose each other in the chaos. Queue up an ending that leaves us with more questions than answers, and roll credits.

I thoroughly enjoyed Mr. Jones. It successfully keeps us off balance, unsure of anything that’s taking place before our eyes. As for the ending that got stuck in everyone’s craw, there are two possible explanations. The first is that Scott, upon abandoning his meds (for what condition, we’re not told) has a reality break from which there is no return. The footage they’ve shot suggests that Mr. Jones is Scott himself, but this is hard to verify since there seem to be good and evil versions of both characters running around.

The other theory is that Scott did something to screw up the wards that Jones had put in place to protect our world against impending evil, resulting in the latter’s death. Now it’s up to Scott take his place as the new dimensional guardian. Which is only fair, if you ask me. 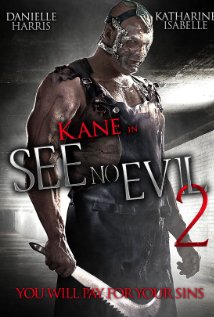 In which righteously indestructible maniac Jacob Goodnight (wrestler Glenn “Kane” Jacobs) rises from the morgue to massacre another troop of late twenty somethings who can’t keep it in their pants.

As you may recall from the first See No Evil, Goodnight continually feels the shame of his lustful adolescent urges, and painful memories of the puritanical punishment dished out by his psychotic mother have become his default setting.

As directed by the Twisted Twins, Jen and Sylvia Soska, who brilliantly helmed American Mary, See No Evil 2 is a perfectly acceptable hack and stack with an exemplary cast.

The incomparable Katherine Isabelle (American Mary, Ginger Snaps) is certainly one of the most compelling actresses in the horror genre, and she brings oodles of panache to the part of Tamara, a charmingly depraved victim of the rampaging Goodnight.

Not that being somewhat virtuous will save anybody here from a seven foot tall, one-eyed gorilla armed with all sorts of nasty looking sharp things.

If I had to gripe about anything, it would have to be a shortage of stylistically memorable mayhem. After all, the Soska Twins are responsible for the dazzling American Mary, one of the most original and provocative horror movies of the last few years.

See No Evil 2 seems a bit perfunctory in comparison, but given the nature of indie cinema these days, filmmakers with artistic inclinations are often tasked with creating conventional fare, in order to earn a payday that will result in something more profound and personal.

I believe that to be the case here.