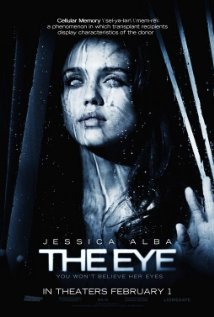 Though it pales in comparison to the Pang Brothers’ original from 2002, the American remake of The Eye with Jessica Alba is better than I thought it would be.

I’d even declare it passable entertainment.

But be warned, it’s another one of those movies that depicts ghosts as peripheral static; a blurry strobe image that flickers in and out of the material plane in annoyingly herky jerky fashion.

Who decided that this is the way that ghosts manifest themselves? It’s become another tiresome horror movie cliche and it’s really starting to annoy the shit out of me.

The lovely Sydney Wells (the lovely Ms. Alba) is a blind concert violinist who regains her sight after a cornea transplant. Sadly, her field of vision now includes the spiritual world, so she spies recently deceased dudes all over the place; trapped fearful souls that are having trouble moving on to the Happy Haunting Grounds.

With the help of a handsome eye specialist with the world’s worst bedside manner (Allesandro Nivelo), she figures out her new peepers came from a young Mexican woman with the power to see into the future.

And now Sydney, like Johnny Smith in The Dead Zone, is seeing impending disasters at every turn.

Some scenes are lifted practically verbatim from the original, like the pants-wettingly scary elevator sequence, but the frights are diluted here since we know Sydney will never succumb to the malign forces around her.

1. She’s Jessica Alba, the star of the movie.

2. Her character is practically a saint.

The ghosts simply don’t pack the eerie punch that characterized the earlier film.

My biggest complaint with The Eye co-directors David Moreau and Xavier Palud is their insistence on casting the always watchable Parker Posey as Sydney’s concerned sister Helen, a totally nothing part.

Helen isn’t funny, smart, or interesting. Why would you want an actress of Posey’s caliber to play such a one-dimensional character?

Smarten up, you guys.