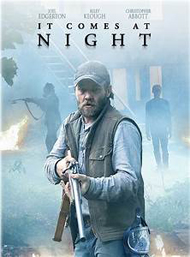 Earning someone’s trust can be tough. If we factor in a deadly plague that’s already wiped out a significant portion of the population, well, then it gets exponentially tougher, especially for two families under one roof.

With It Comes At Night, writer/director Trey Edward Shults has crafted a taut, apocalyptic domestic drama awash in tension and nervous decisions. It’s a movie that’s small in scale, but it carries a sobering interpersonal message that continues to stare humanity in the face.

Paul (Joel Edgerton) is a survivalist ensconced with his family in a deep-woods compound. Everyone wears gas masks and rubber gloves on group expeditions outside, like setting fire to Grandpa (David Pendleton), so we can safely assume something’s in the air.

The shrinking, demoralized tribe eventually welcomes another fleeing family into its barricaded midst, and for a short time new friendships blossom and an alliance is formed. But can real trust survive a viral holocaust? This dilemma weighs heavy on both sides, eventually spelling doom for all parties.

The horrors afoot in It Comes At Night are never fully explained and we have very little by way of actual facts to go on. All the unanswered questions make the danger even more menacing, as speculation and fear take the wheel. What the hell is the source of the contagion? Is there an antidote? How many people are still alive? What’s happening in the rest of the world?

We don’t know. We’ll never know. Not in this story.

Talk about being typecast. Ever since her star turn in the 1998 indie thriller Run Lola Run, German actress Franka Potente could usually be found in films sprinting around scenic European locales, pursued by dark forces.

They don’t get much darker than the titular fiend in Creep, and the speedy Ms. Potente is off and running once again, this time through the labyrinthine London Underground.

Kate (Potente) is a fashionable socialite who gets a tip that George Clooney is in London, so she sets off in the wee hours to crash his party. Instead, she falls asleep on a subway platform and gets locked in the tube for the night.

Upon awakening, Kate discovers her life has rapidly turned to shit. First, she’s set upon by a coked-up coworker (Jeremy Sheffield), and then forced to flee into the tunnels chased by a murderous albino freak (Sean Harris) who lives in the subterranean ruins of an abandoned hospital and shrieks like a bird.

Creep actually works better as a Buñuelian bourgeois bad dream, rather than a straight-up monster movie. Kate’s literal descent into the lowest social strata is the true horror here. From privileged party girl to submerged in sewage, fighting for her life armed only with a spiked heel, she must adapt and survive guided by her most primitive instincts.

Writer/director Christopher Smith gets downright claustrophobic in his underground world building, and he keeps the action grim and brisk. And kudos to actor Sean Harris for creating a first-rate creature, a truly inexplicable anomaly capable of guest-starring in anybody’s nightmare.