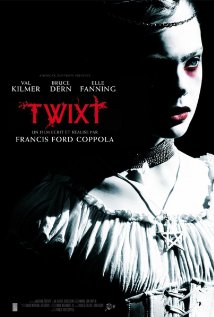 As we all know, one of his first films was the 1963 gothic thriller Dementia 13 for Roger Corman’s American International Pictures.

And like his earlier film, Twixt is an eerie, dreamlike story with revolving color/black and white scenery, and a narrative that shifts gears between reality, dream world, and the mind of a desperate writer trying to get in touch with his long-lost muse.

Hall Baltimore (Val Kilmer), described by one fan as “a bargain-basement Stephen King,” is out on an aimless book tour for his latest hack-job horror novel.

He rolls into Swann Valley, a sleepy little California community, and is immediately pounced upon by wannabe writer and town sheriff Bobby LaGrange (Bruce Dern), who wants to collaborate on a new book. “The whole town is haunted!” he tells the writer with glee.

Baltimore is an alcoholic, an indifferent husband, and a grieving father who’s clearly at the end of his rope, so he agrees to let the loony lawman show him the town.

And soon a new story is born, featuring a corpse with a stake through its heart, the ghost of Edgar Allen Poe, a dangerously pale girl with braces, a haunted hotel, and a clock tower that’s inhabited by “the devil himself.”

Obviously, Twixt is not on a par (or scale) with Coppola masterworks like The Godfather or Apocalypse Now. Plot points come and go, some resolved, some disappearing like lint in a stiff breeze.

But it’s a consistently intriguing little flick that’s both a horror whodunit and a tale about a tapped-out artist who needs to reconnect with his talent in order to survive.

For rabid cinephiles, the movie includes appearances by the likes of David Paymer, Joanne Whalley (Kilmer’s wife), Don Novello (a.k.a. Father Guido Sarducci!) and Elle Fanning, not to mention an introduction read by Tom Waits.

Ultimately, though, it’s Coppola who makes all the right moves, perhaps signaling a return to more creative endeavors than stomping on grapes.