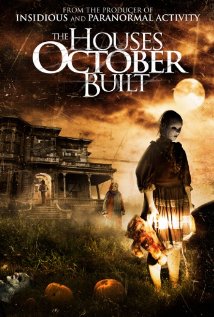 Call me a cockeyed optimist, but I’m the kind of meatball what thinks that life (aka, all the loud shit going on during the waking hours) is an endless learning opportunity.

Simply by not having our heads snagged in our own b-holes, we can hopefully evolve into something that isn’t eaten by bobcats or swindled by kids selling magazine subscriptions.

I sincerely believe if you’re a reasonably intelligent ordinary citizen, you should be able to keep up with your personal narrative to the extent that you can see when your own shitty decision-making is making things unbearable. That is my belief.

Why is this such a struggle for the cast of horror movies and The Houses October Built specifically? Because it’s written that way. It’s our cross to bear so that we can see the trap springing merrily shut.

Armed with digital cameras, four dudes and a woman named Brandy hit the open road in a recreational vehicle looking to document America’s scariest Halloween haunts. They head south, following hideously costumed hillbillies from one trauma-inducing spook house to the next, until they end up in New Orleans.

Strange and disturbing occurrences are routine along the way, including confrontations with hostile carny folk and vehicular infiltration by creeping intruders. Anyone with the common sense of a deer smelling a fire in the wind would have hightailed it to the nearest blue state, but the four dudes and Brandy push onward. Sad, really. I wonder who found the footage?

The cast is also billed as the crew. Not quite sure what’s up with that, but I would like to congratulate director Bobby Roe, because The Houses October Built is one scary-ass movie.

Way more effective than The Blair Witch Project. Witches aren’t scary. People are scary. Especially in those parts of the world where it gets dark super fast and the scarecrows come to life.