It took me a few minutes to figure it out, but Suburban Gothic appears to be a piss-take version of Zach Braff’s Garden State.

Yes, that decade-old cinematic testament to post-grad honky malaise that helped coin the term Manic Pixie Dreamgirl (Google it), and gave the Shins a modest career boost. If this is indeed the case, then my sombrero is off to writer-director Richard Bates Jr. Well played, sir. *Golf clap*

Matthew Gray Gubler (aka, Dr. Jeremy Reed on CBS procedural Criminal Minds) is both droll and goofy as Raymond, a latent psychic with an MBA, forced by circumstances to boomerang home to live with emotionally fragile Mom (Barbara Niven) and asshole football coach Dad (Ray Wise).

Shortly after his arrival, the Mexican landscaping crew at his parents’ house uncover a child’s skeleton in the backyard—and a-haunting we will go!

When Raymond isn’t mowing the lawn or dodging bullies, he gets booze and sympathy from Becca the bartender (Kat Dennings, hubba hubba!) a former classmate with a former weight problem, who becomes his foxy, wisecracking Watson in the Case of the Kid in the Ground in the Yard.

Idiosyncratic auteur John Waters has a small part in Suburban Gothic, which should give you an idea of the farcical low-budget aesthetic that’s in play here. Fellow fringe dwellers Jeffrey Combs, Sally Kirkland, and Mackenzie Phillips show up as local color, but it’s the haunted-house action that remains the most intriguing element, with Raymond and Becca making one of the wittiest team of mystery solvers since Nick and Nora.

Can they please have their own series on Showtime? It would be way better than the current season of True Detective.

Just when you think the vampire genre has finally been laid to rest, ingloriously felled by a wooden stake autographed by the cast of Twilight, along comes a stunner like A Girl Walks Home Alone at Night, giving us a vibrant new milieu to consider. With seemingly minimal resources (tiny cast, spare dialogue), writer-director Ana Lily Amirpour has bestowed a dazzling gift on jaded horror fans. What we have here, is a striking black-and-white horror Western, featuring a skateboarding vampire girl (Sheila Vand), instead of a laconic gunslinger, stalking a desert town like an avenging angel.

Welcome to Bad City, Iran. It’s a lawless patch of sand with a high murder rate surrounded by oil pumps and miles of godforsaken badlands. Arash (Arash Marandi), is a dutiful James Dean-ish gardener with a junkie dad (Marshall Manesh), who owes money to local crime boss Saeed (Dominic Rains), a reptilian goon dabbling in drugs, prostitution, and loansharking. Saeed is indeed a bad man, but almost comic opera in his appropriation of American gangster swag, like the cheap neck tattoo that reads simply, “Sex.”

One night, after shaking down a hooker (Mozhan Marno), Saeed encounters a pale, mysteriously cloaked woman (Vand, looking like a punky Heathers-era Winona Ryder), whom he invites to his swinging pad for cocaine and bad techno music. Saeed gets more than he bargained for.

Later, Arash, dressed like Dracula, meets the very same girl, while he’s blitzed out of his gourd on Molly, and soon falls in love. But is love enough when your new lady friend has a serious drinking problem?

Employing closeups of white faces surrounded by darkness, Amirpour has a ball with light and shadow, fashioning one ingenious frame after another, as if Carl Dreyer (or possibly Jim Jarmusch) were directing a budget film noir. I was hooked from the opening scene of A Girl Walks Home Alone at Night—and it just kept getting better. Get this one in your queue ASAP. 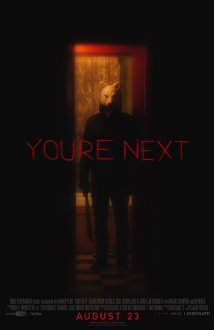 Except for one small detail, You’re Next is a satisfying plunge into dark domestic waters, and shapes up as a nail-biting cross between Straw Dogs and Strangers.

Aussie starlet Sharni Vinson is dynamite as a resourceful guest defending a dinner party at an isolated manor house against a trio of murderous invaders. The tension level continually hovers near the ceiling and the pace is relentless.

When Crispian (AJ Bowen) brings new girlfriend Erin (Vinson) to the family estate to meet the rest of his affluent clan, all heck breaks loose, as assorted neighbors and dinner guests find themselves perforated by crossbow bolts and chopped into corpse kindling, with the grisly tableaux usually accompanied by the bloody message, “You’re next!”

As luck would have it, plucky Erin grew up in a survivalist camp and has the skills to fight back against a team of assassins hidden behind creepy animal masks. There’s nifty gallows humor and gritty kills, and the cast includes genre veteran Barbara Crampton as the family matriarch.

My question for director Adam Wingard and writer Simon Barrett is this: Is art director Nathan Truesdell color blind, or did you sign off on the brown blood? During a few key scenes, stabbing victims look more like sloppy sundae eaters, with faces and clothes soaked in a distinctly caramel-colored goo. It’s a noticeable distraction in an otherwise exciting flick.

The wheel is not reinvented, but You’re Next packs more than enough thrills to keep a body tuned in, even if it is covered in chocolate syrup.