Though it pales in comparison to the Pang Brothers’ original from 2002, the American remake of The Eye with Jessica Alba is better than I thought it would be.

I’d even declare it passable entertainment.

But be warned, it’s another one of those movies that depicts ghosts as peripheral static; a blurry strobe image that flickers in and out of the material plane in annoyingly herky jerky fashion.

Who decided that this is the way that ghosts manifest themselves? It’s become another tiresome horror movie cliche and it’s really starting to annoy the shit out of me.

The lovely Sydney Wells (the lovely Ms. Alba) is a blind concert violinist who regains her sight after a cornea transplant. Sadly, her field of vision now includes the spiritual world, so she spies recently deceased dudes all over the place; trapped fearful souls that are having trouble moving on to the Happy Haunting Grounds.

With the help of a handsome eye specialist with the world’s worst bedside manner (Allesandro Nivelo), she figures out her new peepers came from a young Mexican woman with the power to see into the future.

And now Sydney, like Johnny Smith in The Dead Zone, is seeing impending disasters at every turn.

Some scenes are lifted practically verbatim from the original, like the pants-wettingly scary elevator sequence, but the frights are diluted here since we know Sydney will never succumb to the malign forces around her.

1. She’s Jessica Alba, the star of the movie.

2. Her character is practically a saint.

The ghosts simply don’t pack the eerie punch that characterized the earlier film.

My biggest complaint with The Eye co-directors David Moreau and Xavier Palud is their insistence on casting the always watchable Parker Posey as Sydney’s concerned sister Helen, a totally nothing part.

Helen isn’t funny, smart, or interesting. Why would you want an actress of Posey’s caliber to play such a one-dimensional character?

Smarten up, you guys.

The real title of this Yuletide bloodbath should have been Billy Never Had a Chance. I mean, come on! Here’s a kid who’s already been spooked by his evil/senile grandpa into being afraid of Santa Claus, who then watches his parents get slaughtered by a stickup man dressed as St. Nick. Then he’s shipped off to an orphanage where a cruel Mother Superior (Lilyan Chauvin) beats him for watching a couple engage in sexual congress (in an orphanage?) and then forces him to sit on Santa’s lap. He’s not even 10 years old yet! How the hell did they think he was going to turn out? Our cookie-cutter approach to mental illness is so lame.

Fast-forward 10 years and Billy the ticking time bomb (Robert Brian Wilson) is now a handsome, strapping young man—with a job in a toy store. Yeah, what with his mom and dad getting iced by Santa and all, he probably should have reviewed his career options a bit more thoughtfully, but I guess he needed the money for a new bike or something. Inevitably, Christmas rolls around and Billy’s nerves are a trifle frayed, as visions of the holly jolly fiend bombard his every waking moment. And for the piece de resistance, his drunken store manager (Brit Leach) makes poor Billy pull Santa Claus duty for the legions of snotty moppets that descend on the store like locusts on Christmas Eve. Like I said, he never had a chance. Hell, I’d have gone on a killing spree for having to entertain the brats, even without Billy’s tragic backstory.

Yes, it’s a ham-fisted and lurid psychodrama with plot developments you can see coming from miles away, but director Charles Sellier made sure that Silent Night, Deadly Night doesn’t scrimp on the spectacle essentials (i.e., blood and boobs). And in its painfully obvious effort to illustrate why this traumatized kid becomes an axe-wielding killer, we are forced to relive those horrible formative years right alongside Billy—which is far and away the most horrifying aspect of the movie. Suck it, Mother Superior!

Let’s face it: You really can’t miss with an evil, murderous Santa Claus. Maybe they should have called it Portrait of Santa as a Young Maniac. 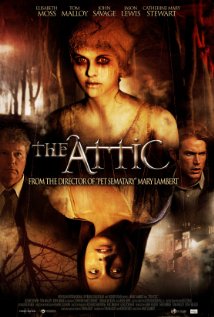 I haven’t really watched Mad Men, so actress Elisabeth Moss is kind of a revelation to me. If you haven’t seen her in the miniseries Top of the Lake, directed by Jane Campion, I suggest you do so, because it’s totally brilliant, and so is she.

In The Attic, a younger Moss portrays Emma, the increasingly delusional protagonist in a rural-goth take on Polanski’s Repulsion. Wait, did I say delusional? Perhaps she’s just a curious insect that’s wandered into the wrong fly trap.

Emma lives in a house near the woods. Her father (John Savage) and mother (Catherine Mary Stewart; who could ever forget the classic Night of the Comet?) are hopeful that she’ll finally want to go to college, but Emma prefers traipsing around the house in her nightie or exploring the creepy attic with her developmentally disabled brother Frankie (Tom Malloy, who also wrote the script).

A psychiatrist (Thomas Jay Ryan) is called in by the parents, but Emma proves to be a patient with more layers than a blooming onion.

Moss is riveting as Emma, an unmoored girl in the wrong place at the wrong time. Is she going insane? Has she been possessed by a malevolent house spirit? Are Mom and Dad conspiring against her?

Like Rover with a new soup bone, you’ll be chewing on the possibilities for a while. That said, The Attic is by no means perfect: Director Mary Lambert (Pet Semetary, lots of Madonna videos) definitely built this one to be a slow burner—rich in atmospheric dread but with the action (and bloodletting) more strategically rationed.

As we all know, one of his first films was the 1963 gothic thriller Dementia 13 for Roger Corman’s American International Pictures.

And like his earlier film, Twixt is an eerie, dreamlike story with revolving color/black and white scenery, and a narrative that shifts gears between reality, dream world, and the mind of a desperate writer trying to get in touch with his long-lost muse.

Hall Baltimore (Val Kilmer), described by one fan as “a bargain-basement Stephen King,” is out on an aimless book tour for his latest hack-job horror novel.

He rolls into Swann Valley, a sleepy little California community, and is immediately pounced upon by wannabe writer and town sheriff Bobby LaGrange (Bruce Dern), who wants to collaborate on a new book. “The whole town is haunted!” he tells the writer with glee.

Baltimore is an alcoholic, an indifferent husband, and a grieving father who’s clearly at the end of his rope, so he agrees to let the loony lawman show him the town.

And soon a new story is born, featuring a corpse with a stake through its heart, the ghost of Edgar Allen Poe, a dangerously pale girl with braces, a haunted hotel, and a clock tower that’s inhabited by “the devil himself.”

Obviously, Twixt is not on a par (or scale) with Coppola masterworks like The Godfather or Apocalypse Now. Plot points come and go, some resolved, some disappearing like lint in a stiff breeze.

But it’s a consistently intriguing little flick that’s both a horror whodunit and a tale about a tapped-out artist who needs to reconnect with his talent in order to survive.

For rabid cinephiles, the movie includes appearances by the likes of David Paymer, Joanne Whalley (Kilmer’s wife), Don Novello (a.k.a. Father Guido Sarducci!) and Elle Fanning, not to mention an introduction read by Tom Waits.

Ultimately, though, it’s Coppola who makes all the right moves, perhaps signaling a return to more creative endeavors than stomping on grapes.

When using public transportation it’s generally a good idea to pay attention to the stops. This is especially true of the New York subway system since the labyrinthine underground is apparently teeming with cannibals.

A quartet of yuppie jerks gets 86ed from a strip club while celebrating Bro Mikey’s (Kip Pardue) bachelor party. On a whim they decide to catch a subway uptown for more partying, and meet up with a pair of strippers en route.

All too soon the foreplay’s over and they’re on the run from a bunch of CHUDS (Cannibalistic Humanoid Underground Dwellers, duh!) who look like off-duty extras from The Pirates of the Caribbean.

Stag Night successfully takes a moldy premise and breathes some life into it by not wasting our precious time with shit we don’t care about. The group is dropped into perilous circumstances with very little fanfare, and the ensuing action is breathless and brutal, with buckets of believable blood and guts (including a couple tasty decapitations).

The depiction of the subterranean squatter camps is rendered in vivid detail, revealing a savage society that has siphoned electricity and water from our own, while developing its own harsh code of survival.

Writer Peter A. Dowling relies a bit too much on the chaotic shaky cam, but he’s obviously right at home with this sort of fast-paced murderous mayhem. 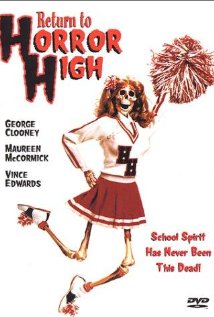 Once again I’ve been overtaken by a bout of idiotic nostalgia, so hold onto something. Let us return now, to the mid-1980s, a time when George Clooney was a nobody; when women strutted about in loose-fitting jumpsuits, and men wore break-dancing pants and white sneakers—all the better to flee from the axe-wielding maniacs, who seemed to be popping up everywhere.

Return to Horror High wears the trappings of a slasher film, but it’s really more of a sly primer on the genre as well as a goofy tribute to those resourceful filmmakers who routinely found a way to finish a crappy movie that no one would even admit to watching in the first place, because slasher movies have no redeeming qualities. And yet, watch them we do.

A schlocky horror picture crew sets up shop in an abandoned high school, where a few years before, a series of grisly murders took place. (Let’s face it, we’re not here for non-grisly murders.) Somehow, the killer was never found! (Which doesn’t say much for the competence of the local constabulary. Just sayin’.)

As the film crew, including cheapskate producer Harry Sleerik (the great Alex Rocco), director Josh Forbes (Scott Jacoby), and leading lady Callie Cassidy (Lori Lethin, from Bloody Birthday and The Prey, among others), feverishly tries to re-create the mayhem of the original murders, they begin to notice that both actors and techs are disappearing all over the place.

The premise allows writer/director Bill Froehlich to zoom in on the nuts and bolts of the slasher movie, even as his characters gamely go about the business of unmasking a killer and finishing the stupid film. “Why do people walk into dark basements without a flashlight?” wails Callie, as she and her policeman boyfriend Steven (Brendan Hughes) prepare to do exactly that.

Return to Horror High is like Truffaut’s Day for Night—as directed by Roger Corman. It both lances and enhances the illusion of low-budget filmmaking, and in doing so, offers up periodic glimpses of why so many of us cheerfully waste our lives watching such wretched nonsense.

Froehlich layers past and present like a cake boss, telling the story of the original massacre, the making of the film, and the comic police investigation (featuring Maureen “Marsha, Marsha, Marsha” McCormick) that follows, all with a wink, and a few timely “meta” observations from the cast.

When Callie objects to having her shirt torn open in a meaningless scene, Harry realizes a compromise is called for. “Write ’em a hopeful, life-affirming scene where they talk about love and children—and make sure it’s set in the showers,” he commands the hapless writer.

Note: A very young and boyish George Clooney does indeed get top billing, even though he only lasts about 10 minutes. That’s called shrewd marketing. Harry would approve.