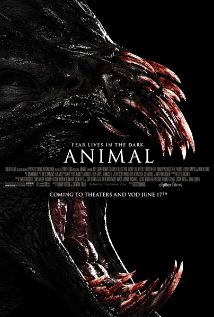 No, it’s not the Rob Schneider movie. That would be too depraved even for me.

Welcome to another episode of We’re A Bunch of Dipshits Who Went Camping. Two couples and their gay friend go for a hike, get lost in the woods, and are pursued through the pines by some kind of super-powerful apex predator. The creature itself is the best part of Animal, and frankly, it deserves a better movie than this tedious time waster.

The beast is close to human size, really fast, agile, and powerful. It appears to be equal parts rodent, reptile, and canine, and must have been fasting recently, because this thing is first in line at the human flesh buffet, barely slowing down to nosh on one victim before another lands in his lap. Put him on a plate son, you’ll enjoy him more.

Predictably, things bog down when the campers discover a fairly majestic log cabin to hide in, one that already has a trio of trapped hikers, including former Kevin Smith co-star Joey Lauren Adams. That’s when these idiots turn on each other and reveal long-simmering secrets that have no bearing on the action whatsoever, but do fill a tidy bit of time.

Animal is not awful, but when you introduce a badass creature that piques the curiosity, we want to know a little backstory, like, what the hell is it and where’d it come from? This information is not forthcoming, but while we’re twiddling our thumbs in the cabin, we do find out that the studly Jeff (Parker Young), who has long since had his head removed, may have once had a hookup with Sean (Paul Iacano), much to the chagrin of Mandy (Elizabeth Gillies), the hot Final Girl.