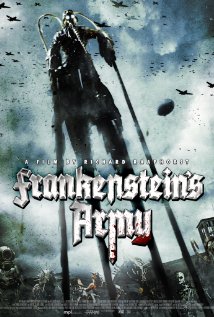 If you haven’t seen anything worth inviting into your Netflix queue lately, Frankenstein’s Army is a brilliant remedy.

What we have here is a disturbing Weird War tale with steampunk accoutrements fitted into a “found-footage” frame, with a visual aesthetic that’s bold and nightmarishly distinctive.

In the waning days of World War II, Russian troops are streaming into Germany, wreaking havoc along the way. One such unit is accompanied by Captain Dimitri (Alexander Mercury), a cameraman making a documentary about these “heroic” soldiers.

While holed up in a bombed-out village, the group discovers a church converted into a mad scientist’s lab and are soon set upon by the most outré pack of Nazi zombie-robot-monsters I’ve ever seen.

Frankenstein’s Army is a Czech/US/Netherlands co-production filmed in the Czech Republic, which perhaps goes a long way toward explaining its unique appeal.

A hearty shake of my flippers goes to director and story man Richard Raaphorst, who hits a horror home run his first time at bat.

Admittedly, the lengths needed to preserve the found-footage premise become increasingly (and purposely, I think) absurd as a 70-year-old Soviet movie camera is able to capture pristine audio while getting tossed around like a Samsung at a frat party.

But Raaphorst is a filmmaker with vision: his nimble mind invents extraordinary beings, and like Dr. Frankenstein (Karl Roden), he has the ability to bring them to life.

He’s clearly not just another fawning acolyte of Sam Raimi or Tim Burton—if anything, his work reminds me of England’s once-reigning madman, Ken Russell.

Take it from me, Frankenstein’s Army is some very fresh hell, indeed. Highly recommended. 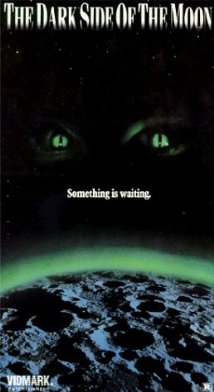 In space, no one can hear you yawn.

Sadly, this cheezoid mashup of Alien and The Thing features no Pink Floyd in the soundtrack. In fact, The Dark Side of the Moon has precious little going for it, although its depiction of a “futuristic” space ship from the Year 2022 is good for some snarky horse laughs. Really? Steam pipes? And the electronic consoles are constantly misfiring and shooting off sparks while the teensy monitors look like they would be more at home hosting a spirited game of Pong. Oh well, you get your perks where you can.

A small crew of mostly no-name talent (headlined by John Diehl, Cruiser from Stripes, and Joe Turkel, Tyrell from Blade Runner) finds itself adrift on the wrong side of the moon where it encounters a derelict space craft that has mysteriously appeared direct from the Bermuda Triangle (*eyes roll*). It’s lone occupant is a shape-shifting creature that turns out to be… THE DEVIL!

Yes, there are spoilers aplenty here, but trust me, you will not be watching The Dark Side of the Moon for its agile plot twists. It’s cheap, boring, ineptly written, and offers nothing whatsoever in the way of frights. Director D.J. Webster’s idea of cinematic finesse consists of extreme closeups of the cast, in case you were wondering how their pores are holding up in the vacuum of space. Listen carefully: Not every artifact from a bygone era is worth saving. 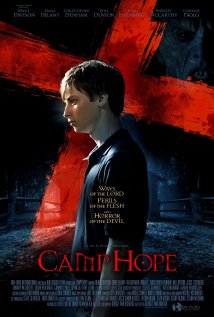 I think that if a movie is featured on Fearnet Channel it should, in fact, be a horror movie. While writer-director George Van Buskirk is able to cobble together a few ominous sequences, Camp Hell, for the most part, is a tepid coming-of-age film in which brooding protagonist Tommy Leary (Will Denton) decides that the fundamentalist sect of the Judeo-Christian faith that has enveloped his family and friends is not to his liking. On behalf of everyone who managed to sit through this sleepy spectacle, I would just like to add, “Congratulations.” And “Who gives a shit?”

Obviously Van Buskirk must be connected to “somebody” in the filmmaking community, because he managed to cajole Andrew McCarthy, Dana Delany, Bruce Davidson and Jesse Eisenberg into appearing in this painfully amateurish production, which looks like it was shot on Super 8 film. Throughout its 99 interminable minutes, Camp Hell (originally titled Camp Hope—Oooh! Scary!) attempts to dress-up an adolescent lad’s clumsily symbolic account of losing both his virginity and his religion, with occasional references to Satan, who seems to be lurking in the bushes at Camp Hope, a strict Christian camp run by authoritarian asshole Father Phineas (Davidson).

Sadly, there is no Satan, no demon, no monster, no murder, no nothing, no kidding. Even the scene where Tommy dry humps his girlfriend for the first time, and thus opens the doorway to all sorts of temptations and pleasures of the flesh—has all the drama and passion of a QuikBooks tutorial. The power of Christ and I compel you to avoid Camp Hell.