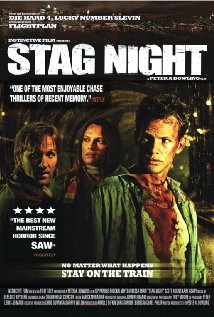 When using public transportation it’s generally a good idea to pay attention to the stops. This is especially true of the New York subway system since the labyrinthine underground is apparently teeming with cannibals.

A quartet of yuppie jerks gets 86ed from a strip club while celebrating Bro Mikey’s (Kip Pardue) bachelor party. On a whim they decide to catch a subway uptown for more partying, and meet up with a pair of strippers en route.

All too soon the foreplay’s over and they’re on the run from a bunch of CHUDS (Cannibalistic Humanoid Underground Dwellers, duh!) who look like off-duty extras from The Pirates of the Caribbean.

Stag Night successfully takes a moldy premise and breathes some life into it by not wasting our precious time with shit we don’t care about. The group is dropped into perilous circumstances with very little fanfare, and the ensuing action is breathless and brutal, with buckets of believable blood and guts (including a couple tasty decapitations).

The depiction of the subterranean squatter camps is rendered in vivid detail, revealing a savage society that has siphoned electricity and water from our own, while developing its own harsh code of survival.

Writer Peter A. Dowling relies a bit too much on the chaotic shaky cam, but he’s obviously right at home with this sort of fast-paced murderous mayhem.