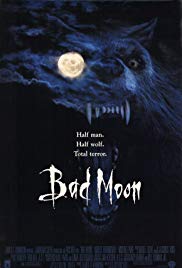 On the other hand, there are fantastic werewolf movies, that any cinephile worth their silver bullets should pay rapt attention to this Halloween season. Joe Dante’s The Howling and John Landis’ American Werewolf In London (both released in 1981) are two crucial examples. If you haven’t had the hair-raising pleasure, get on them before the wolfsbane blooms. Chop, chop!

Since lycanthropes get little love from the critics, I’m going to point you in the direction of something rare and valuable: a very watchable werewolf fable with a hero dog, called Bad Moon.

Written and directed by legendary weirdo Eric Red (screenwriter of The Hitcher and Near Dark, among others), the movie stars deadpan tough guy Michael Paré, who, once upon a time, was a somewhat bankable actor (Eddie and the Cruisers, 1983, Streets of Fire, 1984).

Here, Paré sinks his teeth into a meaty role as a cursed photojournalist visiting his widowed sister Janet (Mariel Hemingway) in the wooded wilds of the Pacific Northwest.

Unbeknownst to Janet and her son Brett (lovable towhead Mason Gamble), beloved Uncle Ted recently emerged from the jungle after a nasty scrape with a vicious lupine predator, and everyone around him is looking more like Today’s Special with each passing hour.

Fortunately, Thor (Primo), the family German Shepherd, isn’t fooled by this man who looks familiar but smells all wrong. I mean, come on, who goes jogging in the woods all night long?

And thus begins a very real pissing match between guardian and invader.

Other than one sex scene and a few moments of grisly flesh shredding, Bad Moon could be an old Disney film. There’s an inquisitive child, a virtuous mom, a sinister uncle, and a really brave dog.

I’m as surprised as anyone that I got so wrapped up in a boy-and-his-dog movie that I was legit cheering for the fearless canine to save Mom from the Big Bad Werewolf.

Michael Paré and Mariel Hemingway get top billing, but the dog steals the show, plain and simple.