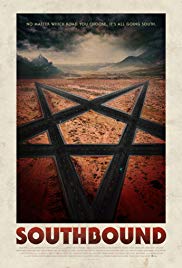 The Allman Brothers were right. The road goes on forever—in hell!

With its parallel storylines laid out in nonlinear fashion, Southbound plays like a supernatural Pulp Fiction. Characters overlap briefly in a moment of transition, and the next tale of damnation/redemption begins, with narration by a lonesome DJ (Larry Fessenden), who functions as a sort of high desert Crypt Keeper on the road to nowhere.

“The Way In” and “They Way Out” are the bookend narratives that frame the action, as a pair of hit men (Matt Bettinelli-Olpin and Chad Villela) attempt to outrun their fates on an infernal stretch of highway that has no exits, no cell phone reception, and no hope.

An all-girl rock band tries to keep it together despite creative differences and being bewitched by wholesome cultists (led by Dana Gould), in “Siren.”

A distracted driver (David Bruckner) creams a woman in distress and calls 911 for help in “The Accident.” Sounds sensible, but who answers the phone?

An obsessed avenger (David Yow) searches for his sister in a small town populated by unfriendly folks.

For anyone who’s never seen an episode of The Twilight Zone, this might be a plot spoiler, but it becomes pretty obvious, pretty fast, that these events are taking place in the Netherworld.

Both the the highway itself and the little communities it serves are a perpetual purgatory where lost souls can relive the worst nights of their lives on a continuous loop.

Some characters develop self-awareness and accept life in limbo, finding it preferable to being torn apart by demons, as befalls anyone foolish enough to think there’s a way out through the desert.

The various segments are written and directed by an assortment of creatives, some more talented than others, but the overall entertainment value offered by Southbound is bountiful indeed. Yes, it’s worth the trip.

Added Value: Take a drink whenever a character says, “What the fuck?”