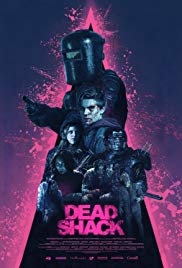 A trio of nosy teens and their piss-poor adult supervision spend a weekend at a cabin in the woods. What could possibly go wrong? Since the name of the film is Dead Shack, we can assume they don’t get their cleaning deposit back.

Jason (Matthew Nelson-Mahood) gets roped into a camping trip by his obnoxious friend Colin (Gabriel LaBelle), which works out fine since he has a major crush on Colin’s sister Summer (Lizzie Boys).

Along for the ride are Colin and Summer’s party hearty dad Roger (Donavon Stinson) and his bored alcoholic girlfriend Lisa (Valerie Tian), who has zero interest in bedding down in the boonies with a bunch of goofy adolescents. At least not while sober.

Inevitably, the snoopy kids stumble upon a neighboring house owned by a lady in body armor (Lauren Holly) with a passel of undead kinfolk who need regular meals. Tonight’s Special: You!

Unfortunately, Roger and Lisa are too busy playing cards and getting plastered to listen to such an outlandish story, so it’s up to these wily misfit teenagers to save the day.

Dead Shack lives up to its potential and delivers splashy fun and flying body parts in Raimi-esque abundance.

With all the baggage present, director Peter Ricq could simply have allowed these characters to speak their minds, give voice to their dissatisfaction, and engage in Dysfunctional Family Feud for the entire weekend, but then we’d have a Tennessee Williams play instead of a grisly and often-amusing Zombie Comedy (Zom-Com).

We liked it. Worth a look.