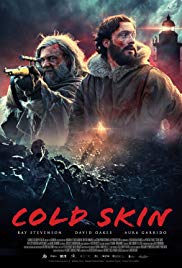 Friend, an English sailor (David Oakes), is transferred to a remote and inhospitable island near the Antarctic Circle, during the height of the First World War, to serve a 12-month stint as a weather observer. It’s never made clear what possible use old weather patterns were to the war effort, but let’s just go with it.

Once ensconced on his wave-tossed rock, Friend wastes no time in setting his cabin on fire after a nocturnal attack by his new neighbors, an army of nimble fish people from the briny deep. Bereft of his surf shack, he turns to Gruner, a misanthropic lighthouse keeper (Ray Stevenson), for shelter and succor, only to end up an accomplice in an all-out war against the fish folk.

Like Sam Peckinpah, Jens explores the questionable dynamics of men under pressure, honor under fire, and all that other stuff we acknowledge when the bodies pile up.

Gruner, a despotic tyrant, is bent on domination and control, a certifiably mad cause that nonetheless swallows up the ambivalent sailor, even as the latter begins to lose his thirst for mayhem. The annihilation of a heretofore unknown aquatic race can weigh heavy on the soul, after all.

The photography, sets, costumes, and effects are uniformly divine, which helps solidify a script that meanders a bit, but never bores. There are indeed epic battle sequences in Cold Skin that pay homage to masters of the craft (Sir David Lean, John Huston, among others) that both stir the blood and make us question our own motives for shedding it.