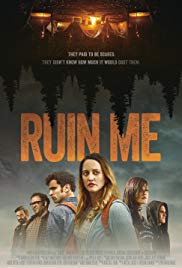 Honey, for our vacation this year, let’s try something different.

Ever wanted to experience the adrenaline boost that comes from getting chased by a masked killer through the forest in the dark? Man, there’s nothing like it!

This is the premise of Ruin Me, in which thoughtful boyfriend Nathan (Matt Dellapina), surprises his taciturn girlfriend Alexandra (Marcienne Dwyer) with two tickets to Slasher Sleepaway—a 36-hour fun-fest that requires six campers to find clues in order to survive a frightful night in the woods.

Editor’s Note: If I were to surprise my wife with a similar gift, the only blood spilling would be mine.

As so often happens in these bucolic scenarios, the line between fantasy and reality gets lost in the dark, and Alexandra and Nathan gradually come to regret signing the liability waiver as fellow campers are stalked and sliced by a nearby escaped lunatic.

Director and cowriter Preston DeFrancis straps the viewer onto a bucking bronco of jumps, twists, and stupefying gaps of logic that play out in agreeable fashion for fans of the Doomed Camper genre. Even as we celebrate our beloved bloody tropes, we begin to notice clues of our own that point in a different direction.

If you can suspend your disbelief on occasion, the time passes enjoyably and you’ll even find yourself rooting for Alexandra, an unexpectedly complex and resourceful Final Girl, played with much gusto by Marcienne Dwyer.

Like the supporting cast, who appear to be a typical assortment of nerds, goths, and sluts, there is more to Ruin Me than just the usual suspects and psychos dueling in the dark. Sometimes the choices we’re forced to make are far scarier than any boogeyman.