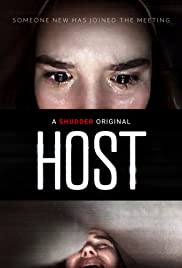 At 57 minutes, it’s not so much a movie as it is a serviceable Twilight Zone episode.

Set up as a Zoom meeting of talking heads, Haley (Haley Bishop) instructs her assortment of nitwit comrades to take the online seance seriously, shortly before the medium (Seylan Baxter) arrives.

Not to play the blame game among the cast, but Jemma (Jemma Moore) commits a major boner in seance etiquette, and soon strange and awful occurrences are taking place in every window!

The various cams blinking on and off does get visually monotonous after a while, but occasionally someone will thoughtfully hoist their laptop to go check on the noise in the other room.

Director and co-writer Savage gets plus points for a bold concept and several solid jump scares. It’s a fairly tense 57 minutes.

On the downside, the characters range from annoying to stupid, so as my brother Dave observed, “you’re compelled to root for the demon.”

Well, what’s wrong with that? Not like you don’t have a spare hour.