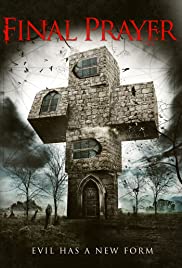 In writer-director Elliott Goldner’s found-footage frightmare Final Prayer (original title: The Borderlands), a team of investigators from the Vatican gets swallowed up by a powerful pocket of pagan worship in rural England.

As we all know from The Da Vinci Code, the Catholic Church has its fingers in dozens of occult pies, and always stands ready to dispatch expert emissaries should the need arise.

A report of supernatural hijinks at a remote country church is reason enough for the Pope to assign hard-drinking clergyman, Deacon (Gordon Kennedy), Gray (Robin Hill), a novice film and audio tech, and officious Vatican rep Mark (Aidan McArdle), to confirm or debunk the phenomenon.

The tiny congregation is headed by Father Crellick (Luke Neal), who fervently believes that the sounds of babies crying and objects moving by themselves in his church are proof of a miracle.

The team has different ideas. Mark thinks it’s a hoax; Gray is perplexed and frightened, while Deacon sees parallels with an older case that didn’t end well.

Fortunately for us, the protagonists get so used to wearing their headset cameras and mics during the course of the investigation, that we get the inside scoop before All Hell Breaks Loose, which happens in spectacular fashion during the final scene.

I advise patience during the first 45 minutes or so. Final Prayer takes a while to get rolling, but the slow burn pays off with a finale that is outré in the extreme.

By then, you’ll be on the hook with the rest of us.