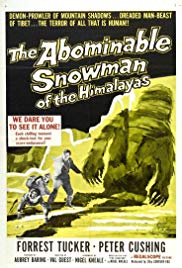 That’s a bit specific, isn’t it? It’s not like there’s an Abominable Snowman of Pasadena to get confused with.

Despite warnings from a bunch of concerned monks, a Tibetan expedition led by brash adventurer Tom Friend (Forrest Tucker) and British botanist John Rollason (Peter Cushing) sets out to find the elusive howling hominid known as the Yeti.

Outfitted with the latest in fur coat technology, the little band, which includes a big-game hunter (Robert Brown) and an eyewitness (Michael Brill), dutifully climbs through blizzard-like conditions to establish a basecamp somewhere near Snowman Central.

Once in their tents, things get intense for the members of the expedition. As the howling and bellowing gets closer, Friend, Rollason, and the rest begin to bend under the pressure of the creatures’ approach.

Cushing and Tucker are actually quite good in their scenes together; the former as the compassionate man of science, and the latter as the Ugly American, a morally bankrupt con artist.

At one point, Friend observes that if “they” drop the Hydrogen Bomb, it might be their own frozen remains that get dug up in the future. There are plenty of thoughtful moments like these, where science and reason clash with greed, arrogance, and fear.

Unlike Christian Nyby’s The Thing From Another World, which came out six years earlier, the creature menace turns out benign, while the real threat comes from soulless hucksters like Friend, who want to exploit and destroy an advanced, ancient race of beings.

Fortunately, justice is served and lessons are learned.

As directed by Hammer Films stalwart Val Guest, The Abominable Snowman of the Himalayas is a fast-moving blast from the past, a fairly fun flick that’s def worth a watch.

Needless to say, it’s always a treat to see a dependable thespian like Peter Cushing sink his teeth into some serious scenery.

Bon appetit, Pete! And thanks for everything.