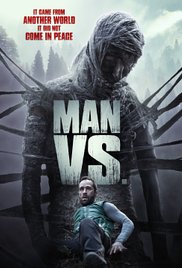 Back in the days before cable television released the kraken, the three major networks made their own budget-minded movies that were broadcast on different nights. “The ABC Friday Movie of the Week” or “The CBS Tuesday Movie” and such like.

Usually these were formulaic dramas for aging network stars like Rock Hudson and George Peppard, but occasionally something supernaturally cool would come down the pipe. Who can forget Kim Darby fighting off vicious pygmy horrors in Don’t Be Afraid of the Dark, or Bo Svenson on the trail of an abominable yeti at a ski resort in Snow Beast (recently remade)?

While they weren’t cinematic jewels, these small-screen frighteners succeeded in leaving a mark on impressional minds (like mine) that were allowed to stay up past bedtime  “just this once.” Filmmaker Adam Massey’s talents were honed by his work in television, and in this case, his instincts for tension and pace are solid as cement.

Massey (A Lobster Tale) has directed over 200 commercials, and he brings that lean efficiency to Man Vs, a harrowing sci-fi/horror/reality show hybrid that scores a lot of points from all over the court. There are some obvious flaws to be found, but the watchability here is very high, as we witness the disintegration of an arrogant TV show host who slowly tumbles to the fact that he’s not alone in the remote wilderness of Northern Ontario.

Leading man Chris Diamantopoulos is spot-on as Doug Woods, a sort-of Bear Grylls Lite forced into mortal combat with an extra-terrestrial predator while trying to film his own Mickey Mouse survival  series. His transition from control freak to just plain freaked-out is expertly rendered—the supposedly self-reliant Woods nearly wets his Patagonia rain pants when he realizes he’s the one being stalked for s’mores by a largely unseen enemy. “Why couldn’t we have picked the Bahamas or Santa Barbara?” he laments to his camera.

Perhaps the enemy should have remained unseen. Among the previously mentioned flaws are the anticlimactic appearance of a nondescript CGI alien predator (complete with that familiar chittering) at around the one-hour mark. Also, the idea that a guy camping for five days could be the basis of a TV show simply isn’t credible. Dude! Haven’t you seen Alone or Naked & Afraid? The bar has been raised.

In spite of its shortcomings, Man Vs delivers an action-packed happy meal without unnecessary plot contrivances, not to mention a first-rate reluctant hero. Diamantopoulos plays Woods as a gutty, resourceful protagonist despite being obviously scared shitless by the severing of contact with civilization.

Sidebar: I was entertaining a story idea about a survival show that turns supernatural after seeing a recent episode of Naked & Afraid that had the contestants cowering in their shelter because they thought they’d glimpsed a man in a ceremonial mask watching their camp. It was a genuinely unnerving moment, and the incident was never explained. It’s a juicy concept, and Massey got their first.