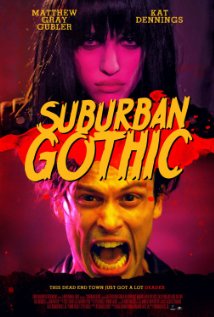 It took me a few minutes to figure it out, but Suburban Gothic appears to be a piss-take version of Zach Braff’s Garden State.

Yes, that decade-old cinematic testament to post-grad honky malaise that helped coin the term Manic Pixie Dreamgirl (Google it), and gave the Shins a modest career boost. If this is indeed the case, then my sombrero is off to writer-director Richard Bates Jr. Well played, sir. *Golf clap*

Matthew Gray Gubler (aka, Dr. Jeremy Reed on CBS procedural Criminal Minds) is both droll and goofy as Raymond, a latent psychic with an MBA, forced by circumstances to boomerang home to live with emotionally fragile Mom (Barbara Niven) and asshole football coach Dad (Ray Wise).

Shortly after his arrival, the Mexican landscaping crew at his parents’ house uncover a child’s skeleton in the backyard—and a-haunting we will go!

When Raymond isn’t mowing the lawn or dodging bullies, he gets booze and sympathy from Becca the bartender (Kat Dennings, hubba hubba!) a former classmate with a former weight problem, who becomes his foxy, wisecracking Watson in the Case of the Kid in the Ground in the Yard.

Idiosyncratic auteur John Waters has a small part in Suburban Gothic, which should give you an idea of the farcical low-budget aesthetic that’s in play here. Fellow fringe dwellers Jeffrey Combs, Sally Kirkland, and Mackenzie Phillips show up as local color, but it’s the haunted-house action that remains the most intriguing element, with Raymond and Becca making one of the wittiest team of mystery solvers since Nick and Nora.

Can they please have their own series on Showtime? It would be way better than the current season of True Detective.