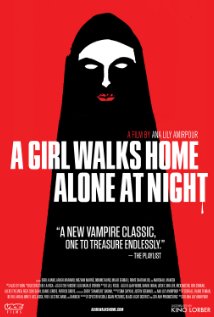 Just when you think the vampire genre has finally been laid to rest, ingloriously felled by a wooden stake autographed by the cast of Twilight, along comes a stunner like A Girl Walks Home Alone at Night, giving us a vibrant new milieu to consider. With seemingly minimal resources (tiny cast, spare dialogue), writer-director Ana Lily Amirpour has bestowed a dazzling gift on jaded horror fans. What we have here, is a striking black-and-white horror Western, featuring a skateboarding vampire girl (Sheila Vand), instead of a laconic gunslinger, stalking a desert town like an avenging angel.

Welcome to Bad City, Iran. It’s a lawless patch of sand with a high murder rate surrounded by oil pumps and miles of godforsaken badlands. Arash (Arash Marandi), is a dutiful James Dean-ish gardener with a junkie dad (Marshall Manesh), who owes money to local crime boss Saeed (Dominic Rains), a reptilian goon dabbling in drugs, prostitution, and loansharking. Saeed is indeed a bad man, but almost comic opera in his appropriation of American gangster swag, like the cheap neck tattoo that reads simply, “Sex.”

One night, after shaking down a hooker (Mozhan Marno), Saeed encounters a pale, mysteriously cloaked woman (Vand, looking like a punky Heathers-era Winona Ryder), whom he invites to his swinging pad for cocaine and bad techno music. Saeed gets more than he bargained for.

Later, Arash, dressed like Dracula, meets the very same girl, while he’s blitzed out of his gourd on Molly, and soon falls in love. But is love enough when your new lady friend has a serious drinking problem?

Employing closeups of white faces surrounded by darkness, Amirpour has a ball with light and shadow, fashioning one ingenious frame after another, as if Carl Dreyer (or possibly Jim Jarmusch) were directing a budget film noir. I was hooked from the opening scene of A Girl Walks Home Alone at Night—and it just kept getting better. Get this one in your queue ASAP.