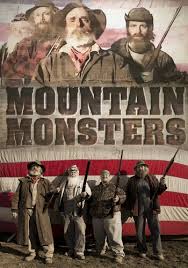 It’s not a movie, but if you’re lucky enough to have Channel 201, Destination America, you must watch this incredible show.

Apparently the hills of West Virginia are teeming with all manner of cryptozoological fauna, including the Moth Man, the Grass Man, wolf men, dog men, devil dogs, wampus beasts, and every distant relative of Bigfoot known to mankind.

So who you gonna call? John “Trapper” Tice and his AIMS (Appalachian Investigators of Mysterious Sightings) team, that’s who!

Trapper and his boys like nothing more than an excuse to go crashing through the woods at night in search of legendary beasts spotted by their hillbilly brethren.

Besides Trapper, there’s Jeff, who’s in charge of research. In other words, he has a laptop and knows how to use it. Willy and Wild Bill build all sorts of outlandish traps, pits, and snares, in hopes of capturing a heretofore unknown specimen. They’ve never succeeded, but by god, it ain’t for lack of trying!

Huckleberry (Woooot! Team Huckleberry!) is a hunter and tracker with a ready supply of guns, ammo, and thermal-imaging gear. (“Wait! There’s something there! *pause* Now it’s gone!”)

And then there’s Buck, the fat-guy comic relief, who once locked eyes with the Moth Man himself—and fell over hypnotized! On camera! At least once per episode, Buck will gaze in wonder at sketchy video evidence of their mythical quarry (usually a misshapen shadow or tree branch that moved) and exclaim, “That thing’s huge!”

Needless to say, AIMS has never brought home any appreciable evidence of wolf men, aliens, blue devils, or thunderbirds. But I sleep safely at night knowing that these fearless investigators… are really, really far away across the country and unlikely to mistake me for the Beast of Bray Road or the bloodsucking Devil Dog of Logan County and fill my hide with buckshot.

Mountain Monsters is a hoot and it’s must-see TV. It’s also been renewed for a second season!