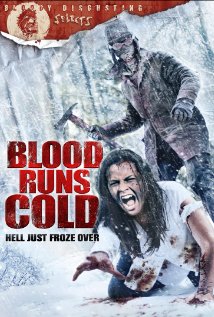 Based on the description, I thought this might be some annoyingly clever musical crossover, since its rather featureless lead character Winona (Hanna Oldenburg) is supposedly a successful pop singer.

To my relief, she doesn’t sing a note. She’s far too busy trying to elude the zombie-cannibal-miner-hillbilly freak that’s intent on having her over for a snack (if you know what I mean).

Blood Runs Cold is filmed somewhere near Stockholm, pretending to be North Carolina—which also accounts for the mercurial accents on display.

Winona (not a Judd) must four-wheel her way through several miles of frozen tundra to a remote house near her hometown that has been rented by her manager.

Note: If this guy was my manager, and he stuck me way-the-hell-out in some snowbound hick town without my entourage, he’d soon be nut-punched.

Winona (not a Judd) finds her crummy dump of a house, settles in and drives to a nearby tavern where she stumbles over her high school sweetheart Richard (Patrick Saxe) and his friends Carl (Andrea Wylander) and Liz (Elin Hugoson).

She invites them all back to her crummy dump (lots of time spent driving around in Arctic conditions just adds to its zero-budget charm) where they fall prey to a multifaceted maniac (David Liljeblad—who also serves as producer and co-writer) with a penchant for pickax perforation.

He falls a bit short of frightening, but I would have appreciated two minutes of backstory on where this colorful killer came from.

With Blood Runs Cold, director Sonny Laguna gives us a fascinatingly unadorned minimalist study in the field of hack-and-stack. Not one dime of this film’s budget was spent on set dressing, wardrobe, or the cast; it’s all earmarked for blood, guts, and decapitation.

And if you ask me, that’s money well spent.