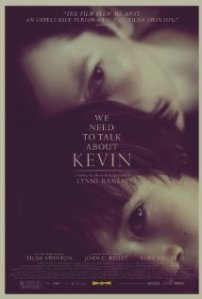 We Need To Talk About Kevin is like one of those nightmare scenarios where the babysitter (finally) figures out that the phone calls are coming from inside the house. In this case, the phone calls are coming from inside the family. Much of this movie’s acclaim comes from Tilda Swinton’s bravura performance as the long-suffering mother of a burgeoning sociopath—and justifiably so. But let’s not overlook writer-director Lynne Ramsay’s achievements, as she raises a ton of tricky questions about parental responsibility. The lovely Barbara and I stayed up well past the credits discussing all the uncomfortable implications. Interestingly enough, we came to the same conclusion: we would have smothered the kid with a pillow and chopped him up in the bathtub. And that is why I love the lovely Barbara.

In nonlinear fashion, we become acquainted with Eva (Swinton), her not-very-observant husband Franklin (John C. Reilly), and their obviously malevolent offspring, the titular Kevin. The viewer lurches between the past and the present (a surprisingly smooth ride!), watching in growing alarm as Kevin seems to take an immediate dislike to his mother, torturing her through his formative years by crying incessantly, refusing to learn the mechanics of potty training, and by feigning good-natured amiability around the clueless Franklin. You don’t need a house call from Dr. Plotspoiler to quickly intuit that at some point, Kevin will go down the rabbit hole and emerge as a fully formed monster.

Once the story is set on its inevitable course, the questions start coming hard and fast: Is Kevin just Satan in a diaper? That’s the easy answer, but as Kevin grows into a handsome teenager (Ezra Miller), we get the nagging suspicion that Eva and Kevin are more alike than we’d first thought. Mother and son greatly resemble one another, and during a night out together (a date?), look more like a couple than Eva and Franklin ever do. One of the only times in the movie that Kevin approves of his mother is when he discovers that her wit is every bit as vicious as his own.

The finale of We Need To Talk About Kevin is also maddeningly ambiguous. Does Eva continue to visit her son in prison because: 1) She feels responsible for his crime? 2) She’s punishing herself for her failure to socialize the little fiend? 3) She is tormenting him in return? A very provocative, original, and disturbing movie—even more so because of the depth of skill and artistry that went into its making.