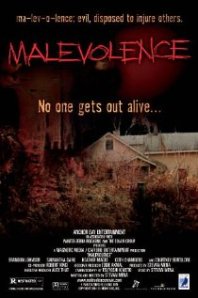 I believe the concept of crooks on the lam hiding out in a haunted house dates back to Buster Keaton. True, in Malevolence, the crooks are hiding next door to a haunted house—and it’s only haunted inasmuch as there’s a deranged serial killer living there. A very similar motif is used (more successfully, I might add) in the Andy Serkis black comedy The Cottage (2008). But Malevolence is not a waste of time.

Julian (R. Brandon Johnson) and Marilyn (Heather McGee) are the couple we’re supposed to care about, but they’re not all that likable. They get mixed up in a bank heist with Marilyn’s hoodlum brother Max (Keith Chambers) which concludes with everyone fleeing the scene and Max mortally wounded. As Marilyn thoughtfully reminds Julian several times that it’s his stupid fault her brother took a bullet, one gets the distinct feeling that this couple ain’t gonna make it. Meanwhile, the other member of their gang, Kurt (Richard Glover, a poor man’s Jeff Conaway), kidnaps a young mother and her tomboy daughter, and takes them to the remote hideout where the robbers are supposed to reconnoiter and divide the money. Unfortunately, the hideout isn’t quite remote enough; right next door there’s a decrepit factory farm inhabited by a bargain-brand Michael Myers (the Halloween killer, not Austin Powers) who brings his steely chopping knife to the party.

Nothing too subtle at work in Malevolence; it’s a lot of chasing back and forth outside at night, with a little bit of Ed Gein rural weirdness mixed in. Writer, director, producer, and composer Stevan Mena does a competent job of keeping things lean and tense, though his protagonists suffer from a kind of collective amnesia that prevents them from making sure the killer is dead, which probably would have shortened the movie by a good 20 minutes. Come on people, it’s the 21st Century! You know as well I do that if you’re fortunate enough to knock the maniac down, you MUST continue to beat on the body till it resembles guacamole. And we’ve known this for at least 25 years.