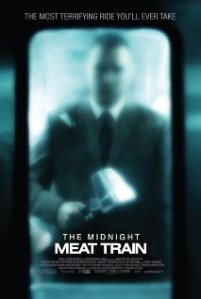 I haven’t read enough Clive Barker to decide if I’m a fan or not, but he certainly spins a fascinatingly lurid yarn. The Midnight Meat Train is based on one of his short stories, and it’s a bloody fun ride, even though I kept thinking I was watching a chopped up version that had scenes missing. There are moments when the action inexplicably jumps from Point A to Point M, and you wonder how the hell we got here.

A right-before-he-got famous Bradley Cooper plays Leon, a wannabe artsy photographer trying to capture “the beating heart of New York City” to impress snooty art dealer Susan Hoff (Brooke Shields), who advises him to take more chances, and not run away when danger rears its ugly head. He starts hanging out in the subway during the wee hours of the morning and stumbles upon a very dapper and intense-looking butcher (Vinnie Jones, in a silent part), and is immediately compelled to follow him around. (How do we know he’s a butcher? Well, he carries a meat mallet the size of Mjolnir, for one thing.) Sure enough, it appears his new-found subject is a methodical serial killer who’s been making late-night subway riders disappear for quite some time. Poor Leon realizes too late, that the butcher’s grisly nocturnal rituals are all a part of (sung in Elton John voice) “the c-i-r-c-l-e of l-i-i-i-f-e!”

Anytime you pad out a short story into a feature length film, there’s going to be filler, and The Midnight Meat Train is no exception, but for the most part, director Ryuhel Kitamura and screenplay scribe Jeff Buhler keep it fast and gruesome. The ending is pure Whiskey Tango Foxtrot, but it’s not a cop-out. It’s surprisingly weird and horrible, and hints at a “bigger picture” that’s even more terrible than we had first supposed. And that, folks, is what good horror should do. What, no sequel?