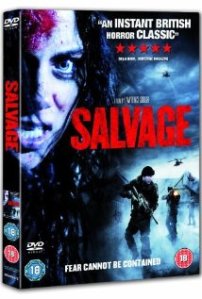 I’ve said it before, but it bears repeating. Atmosphere and the unpredictable flow of tension is the life’s blood of any Horrific Flick.

A successful horror movie is one that could be just as effective if it were staged as a play, and you can count Salvage among them. It’s a “trapped in the house” potboiler about a neighborhood under siege, from both a bloodthirsty (alien?) creature and a trigger-happy military—and we’re left to decide who’s the bigger threat.

Paranoia, infidelity, and xenophobia coat the air like cheap incense.

Much of the film’s running time is consumed with the domestic complications of Beth (Neve McIntosh, who rocks!), the smokin’ hot divorced mother of Jodie (Linzey Cocker), a sullen teenager.

Are there any other kind?

Jodie gets dropped off by Dad to spend Christmas with her estranged mother who lives in a snug little cul-de-sac on the coast of Britain. (Sorry, don’t know which one. Is it really that important?)

The little community is soon crawling with soldiers shooting at anything that moves. A trickle of gore leaks out as a (largely offscreen) body count mounts. The creature wreaks bloody havoc, leaving a parade of mangled corpses in its wake.

For about a third of Salvage, you’re wondering if it’s just a movie about paranoia. Neighbors turn on each other, some seeing terrorists behind every bush. Or perhaps the military has staged a coup, and they’re rounding up citizens on Christmas to work in the mines!

Could happen. This is just one of the red rubber balls you’re left to chew on. Another is the dicey relationship between Beth, a woman who seemingly chose a career in science (and getting shagged by other blokes) over being a wife and mother, and Jodie, the prudish progeny who resents her.

Like Ellen Ripley before her, it’s up to Beth to get in touch with her primal side before she can really earn the title of “mother.”