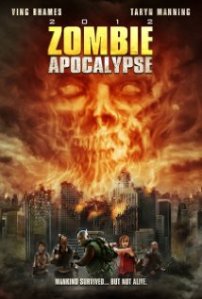 Noun: An artistic work in a style that imitates that of another work, artist, or period.

Today’s vocabulary word is pastiche, as in, “The Ving Rhames movie Zombie Apocalypse is a pastiche of the popular television show The Walking Dead.”

And that’s about it. There’s nothing groundbreaking or envelope-pushing at work here. It’s pure comfort food, executed with very little verve.

You know the drill. A ragtag band of plague survivors try to avoid being eaten by zombies long enough to make it to Catalina Island where the remains of the government has setup housekeeping.

Ving Rhames is Henry, a sledgehammer-swinging bad-ass, which pretty much makes him the most developed personality among this group of stock characters.

There’s also Julian (Johnny Pacar), a wisecracker who quotes Wordsworth; Mack (Gary Weeks), a leader-type who looks and acts like Ryan Reynolds; Ramona (Taryn Manning), the whiny girl who grows up fast; and Cassie (Lesley-Ann Brandt), the hot chick with the sword.

Spoiler: Some of these people don’t make it.

What Zombie Apocalypse has going for it is a breezy pace. The action rolls along at a steady clip, never really bogging down with unnecessary backstory. This group is almost always ass-down in the frying pan.

On the flip-side, the special effects are cheesily rendered CGI bullshit which extinguishes a great deal of the fright factor. People should be afraid of zombies because seeing their own flesh chewed from their bones while still alive is scary.

Blobs of drawn-on blood splatter is not. This technique is also used for countless zombie headshots, and it looks cheap and amateurish.

If you’re starving for an undead fix, this one will barely make a dent in your hunger. It’s like a zombie chowing down on an anorexic: Not much meat on them bones.