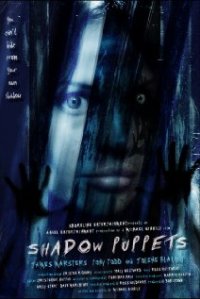 Several folks (mostly attractive women) wake up in a mental institution, dressed in generic undies, with no memory of who they are or how they got there.

They spend the remainder of the film wandering around the facility while trying to steer clear of a dark, shadowy, spider-type thing with a face, that shows up once in a while to kill someone.

Despite the presence of genre-pedigreed actors James Marsters (Spike from Buffy and Angel, who hasn’t aged well); Tony Todd (the Candyman himself!); and Joleen Blalock (she was the Vulcan hottie from that lame Star Trek series with Scott Bakula), there really isn’t much to recommend Shadow Puppets.

This is another one of those annoying “walkabout” movies, with endless scenes of wary characters moving (very slowly) through a largely featureless industrial landscape.

It’s an approach that’s quite different from a movie like Cube, for example, where shocking and creepy details emerge from both the alien environment and the characters’ own heads.

We do discover the identities of the captives, but it doesn’t add up to anything worth writing down. We learn the origin of the smoky, spider thing, but it’s all argle bargle that’s forgotten two seconds after the explanation is delivered. (“It’s the distilled essence of the victims’ life forces,” or some such drivel.)

Note to writer-director Michael Winnick: If we don’t care about the monster or the characters, then you’re going to need lots more gore and gals to maintain a passable level of interest from the average horror fan.

And a brawny dude in a rubber suit would have been a major improvement in the monster department.