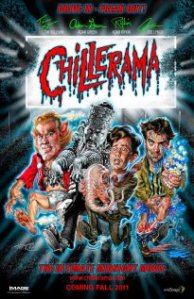 We submit for your approval a quartet of farcical drive-in features rendered in the most tasteless fashion possible. The nearly charming monstrosity is a tribute not only to classic B-movie horror but also to schlockmeister Lloyd Kaufman and his Troma Team, who staunchly believe that there should be no limits on disgusting, juvenile entertainment.

The action takes place at a drive-in movie theater on its last night of operation. Theater owner Cecil Kaufman (Richard Riehle, whom you’ve seen in dozens of small parts over the years) is screening three lost horror movie classics, including Wadzilla, the story of a mutated sperm cell that grows to gigantic proportions and tries to mate with the Statue of Liberty.

The Diary of Anne Frankenstein, is a black-and-white flick starring Joel David Moore (Bones, Hatchet) as Hitler, who wants to create a monster of his very own (played by Kane Hodder).

I Was a Teenage Wearbear, a homoerotic beach-blanket bingo romp about a young man who transforms into a bloodthirsty bear (meaning large, hirsute gay man) under the power of the full moon.

Each section gets its own director: Adam Rifkin (Detroit Rock City), who also stars, does a fine job with Wadzilla, constantly wringing extra laughs out of a one-joke setup.

Adam Green’s (Hatchet, Frozen) Diary of Anne Frankenstein is the most ambitious of the vignettes, and the most artfully realized.

Tim Sullivan (2001 Maniacs, Driftwood) simply doesn’t have enough gas in the tank for I Was A Teenage Wearbear. It’s overly long and silly, though he gets props for a few catchy musical numbers and for casting the always watchable Lin Shaye as the Maria Ouspenskia gypsy woman.

Joe Lynch (Wrong Turn 2) has a barrel of fun as zombies run roughshod over the drive-in in the wraparound tale. And in the end, the fun should be enough to hold your interest.

But make no mistake, this is proudly low-brow cinema, and non-horror buffs probably won’t last to the credits. 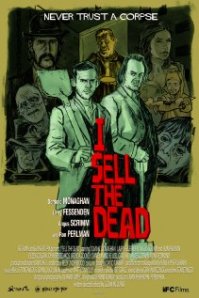 Horror, more than most genres, has little need of name actors.

Did anyone know Jeffrey Combs before Reanimator? How about Bruce Campbell before Evil Dead? Were there any “bankable” stars in Romero’s Dead films?

For the most part, being able to remember hastily written dialogue, and the ability to render it without stuttering, is sufficient.

There are certainly examples, and I Sell The Dead is one, of a few familiar faces with dependable skills elevating modest material to agreeable heights.

Here, Ron Perelman (who is as reliable as they come) is Father Duffy, a 19th century clergyman tasked with taking the final confession of convicted grave robber Arthur Blake (Dominic Monaghan, Lord of the Rings, Lost) who awaits a morning appointment with the guillotine.

Both actors are given sufficient room to ham and ramble, and they make the most of it. I Sell The Dead is highly reminiscent of Jacques Tournier’s grimly fiendish Comedy of Terrors (1963), which cast Vincent Price and Peter Lorre as a pair of inept undertakers. This is broad-stroke black comedy; subtlety need not apply.

The tale unfolds as Blake recounts how he got into the occasionally profitable profession of grave robbery, mentored by his old pal Willie Grimes (Larry Fessenden).

At first, the two find themselves under the thumb of Dr. Quint (Angus Scrimm, aka The Tall Man, from Phantasm) a physician with a seemingly inexhaustible need for cadavers—the fresher the better.

Imagine everyone’s shock and surprise when their latest unearthed specimen turns out to be quite undead!

You can’t go wrong with I Sell The Dead. It’s the very definition of a ripping yarn, where the action is plentiful and over the top, and the principal players really have a ball. 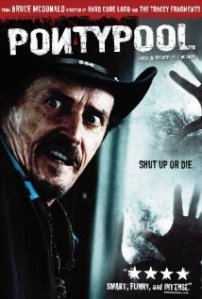 Leave it to those clever Canucks.

Bolstered by a poweerhouse performance by Stephen McHattie, Canadian horror flick Pontypool successfully utilizes the zombie genre to make a point (not a subtle one, but a point nonetheless) about the power of language.

More specifically, about media and its unwholesome influence on our collective consciousness.

Directed by Bruce McDonald (Hardcore Logo, Dance Me Outside), Ponytpool unfolds in the small Ontario town of the same name and stars veteran bad guy McHattie (A History of Violence, Shoot ‘Em Up) as Grant Mazzy, a conspiracy minded radio personality in the middle of nowhere who drinks too much and sounds off about small-town news developments.

When the station’s weather correspondent on the outskirts of town reports that a violent mob is running amok, Mazzy, his producer (Lisa Houle) and engineer (Georgina Reilly) must hunker down in the station and defend themselves.

The premise is Zombie 101: Take a small cast, put them in a claustrophobic pressure cooker, add undead army. What becomes apparent as the movie progresses, is that the zombies in this instance have been driven to madness by some kind of viral phenomenon that’s sound-based.

Mazzy and his coworkers discover that the English language is “infected” and words attract the unwanted attention of the bloodthirsty masses.

So they start speaking French.

I could go on till third period about the message McDonald and writer Tony Burgess hammer out about the irresponsibility of the Limbaughs, the Hannitys, and similar braying asses for inspiring paranoia and the worst tendencies in their listeners, but the main thing you need to know is that Pontypool is a tight, thoughtful thriller that delivers.

McHattie, whom you will recognize from countless roles as a “heavy” (he looks like a slightly more Mephistophelean Lance Henricksen) is superb as a man who is trying his damndest to figure out what the hell is going on.

There are moments when he appears to be acting in his own self-interest (keeping his beleaguered reporter talking on the air even while he’s not in a safe location) but beneath his devilish veneer, Mazzy is a compassionate thinker and a genuine humanitarian.

True, there’s not much zombie action (eating, rending, shuffling) in this one, but the threat is imminent and feels very real.

And for a movie with only one locale and a handful of characters, that’s an amazing feat. I could even see Pontypool becoming popular as aHalloween play. 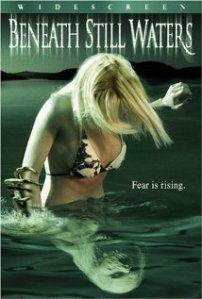 I figured Beneath Still Waters was worth a gamble since Brian (Bride of Re-Animator) Yuzna produced and directed this Spanish-UK collaboration. While there is ample gore and some stellar scenes of Bosch-like depravity, the pace is glacial—endless talky exposition and needless character development.

Nutshell: A town in Northern Spain is flooded after the construction of a new dam. The cover story is that the dam brings jobs, cheap power, and prosperity to the region, but the naked truth is that the “drowned town” was inhabited by a kinky cannibal cult led by a sinister Aleister Crowley acolyte named Salas (Patrick Gordon, as the Richard Lynch-style creepy cult leader).

Fast-forward 40 years later and the ghost or spirit or reanimated corpse of the evil magician returns accompanied by a very small band of fairly scary zombies, and a vendetta against the granddaughter of the former mayor who flooded the town.

There’s a good chunk of memorably nightmarish imagery thanks to the hallucinatory, low-tech, Euro-art school FX (think Méliès rather than Lucas), and Salas’s habit of tearing his victims’ heads off never gets old.

But it’s a pretty slow 90 minutes, most of which look like a made-for-TV movie from the 1970s, so prepare for rough sledding.