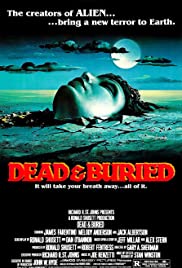 Dead & Buried is a 40-year-old fright flick that has remained available on cable since the Reagan Administration. Now that’s staying power!

We open on the quaint seaport town of Potter’s Bluff, where friendly townsfolk frequently gather to savagely murder unlucky tourists, all caught on camera for those special vacation memories.

Sheriff Gillis (James Farentino) is inevitably handed the case, but he’s distracted at home by his wife’s (Melody Anderson) increasingly strange behavior, which includes teaching her fourth-grade class about voodoo.

Gillis consults with dapper Dr. Dobbs (Jack Albertson) the jazz-loving town coroner, who complains that closed casket funerals are a drag, because no one can fully appreciate the artistry it takes to make a comely corpse—especially ones that have been burned alive or had their throats sliced.

The murders continue unabated, while the sheriff dutifully gathers clues that point to pretty much everybody.

The ending is Rod Serling-meets-Angel Heart, as Gillis realizes he has more in common with his neighbors than he’d care to admit.

Most of Dead & Buried‘s notoriety comes from being the followup to Alien for screenwriters Ronald Shusset and Dan O’Bannon, as well as makeup mastermind Stan Winston, whose gore effects are brutally efficient here.

In some ways, this is a dated artifact that looks downright hokey at times. Compared to Alien, it’s all the way down to earth and mundane in appearance.

That said, Dead & Buried is creepy as hell and full of small-town weirdness, like Norman Rockwell taking a stab at Dorian Gray.

In Dead & Buried, Albertson goes out in grand fashion, as a hepcat mad doctor with delusions of grandeur and visions of immortality.

We should all be so lucky.