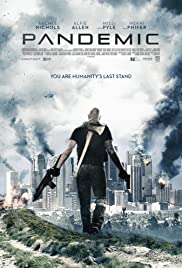 Nothing like a little light entertainment to help shake those quarantine blues.

Can we interest you in a first-person, point-and-shoot craptacular, with a side of zombie dressing?

Sporting a tagline of “You are humanity’s last stand,” Pandemic puts the viewer squarely behind rotating POV cameras in a breakneck race to save uninfected survivors in post-plague Los Angeles.

Nutshell: A virulent contagion has swept the nation, transforming average citizens into berserk cannibals. After the fall of New York, survivor Lauren (Rachel Nichols), heads to LA where doctors are in short supply.

Assigned to a four-person rescue team tasked with rounding up survivors and testing them for infection, Lauren, Gunner (Mekhi Phifer), Wheels (Alfie Allen), and Denise (Missi Pyle), cruise the streets in a retrofitted school bus, dodging and dispatching meat-seeking freaks and armed gangs of plunderers.

Although the team has been specifically ordered not to go in search of family members, this directive somehow gets lost in all the excitement, and personal agendas threaten to derail the mission.

My wife commented that Pandemic is more of a sketch than a movie, and there is truth to that. With only minimal time given to character exposition, it’s the seat-of-the-pants mayhem that’s designed to carry the story, and indeed, there’s no shortage of high-speed splatter.

Unfortunately, director John Suits doesn’t generate much actual adrenaline, and the action seldom rises above (old) video game quality. When the POV perspective shifts rapidly to different characters, it becomes disorienting trying to follow the identities amidst a barrage of choppy, spastic editing.

Instead of freely reveling in post-apocalyptic/undead shenanigans, it took Dustin Benson’s screenplay shifting its focus to Lauren’s private mission, to keep me involved on a basic level.

Rachel Nichols brings surprising depth to a role that could have been adequately filled by a CGI sock puppet, and her supporting cast, particularly Phifer and Pyle, more than pulls its own weight.

Pandemic does not break new ground or offer much in the way of spectacle, but time passes quickly, allowing us to put our own viral anxieties on the back burner.

That’s gotta be worth something, right?