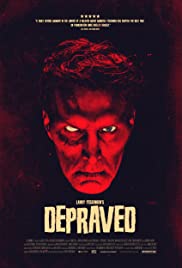 Big Apple underground auteur Larry Fessenden has been referred to as a 21st Century Roger Corman, not only for his ability to nurture talented indie directors (Jim Mickle and Ti West, among others), but presumably because his productions tend to be of the fast and cheap variety.

Yet Corman’s monster matinees bear little resemblance to Fessenden’s sparse, puzzling, and always provocative genre features like Wendigo, Habit, and The Last Winter, where flawed, well-meaning characters encounter or create something that fundamentally changes who they are and the world they live in.

In Depraved, Fessenden’s ambitious, miniature rendering of Frankenstein, we meet Henry, a shell-shocked Army doctor (David Call) who reanimates an assemblage of body parts (Alex Breaux) with the help of his benefactor, Polidori (Joshua Leonard), a scheming pharmaceutical engineer. The only marginally monstrous creature is dubbed Adam, which Henry admits sounds “corny” at first.

Instead of a mad scientist’s laboratory, we get an airy Brooklyn loft where Henry tries to be a supportive creator, but he’s constantly interrupted by his worried girlfriend Liz (Ana Kayne), and bored, impatient Polidori, who impulsively takes Adam out for a night on the town, replete with strippers, whiskey, and cocaine.

Henry proves ill-equipped to be a mentor, with his own wartime trauma never far from the surface. When Adam runs away from the loft in search of female companionship, Henry properly freaks out.

Meanwhile, Adam meets Shelley (Addison Timlin), a pretty barfly who likes Iggy Pop, but it wasn’t meant to be.

As is usually the case in Fessenden films, things don’t work out because his characters are so clearly defined (and doomed) by their inability to adapt to a changing world.

Depraved deserves more attention, especially since Universal Pictures seems bloody determined to reboot its monster franchise after one dismal, expensive flop (The Mummy) and one surprising hit (The Invisible Man).

Fessenden is exactly the sort of budget-friendly, problem-solving hired gun who could (and should) figure into their long-range plans. With Depraved, he ably demonstrates that his take on classic horror honors the past, but can’t wait for the future.