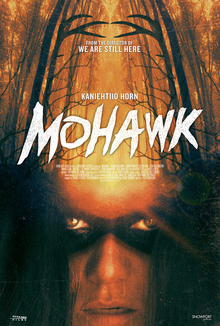 My tri-corner hat is off to Mohawk, a harrowing revenge tale rooted in a particularly dark corner of American history, that comes out with guns blazing and blood flowing.

This is one of those gutsy, low-budget efforts that should earn director and co-writer Ted Geoghegan (We Are Still Here) a long-term contract to do whatever the hell he wants. His filmic instincts consistently hit their marks, allowing him to create vivid, indelible tableaus out of the rawest materials.

During the waning days of the War of 1812, a trio of “outlaws” are pursued deep into the forest primeval of upstate New York by a vicious posse of American soldiers, seeking vengeance for the sneak-attack killing of several members of their company.

As Mohawk warriors Oak (Kaniehtiio Horn) and Calvin (Justin Rain), along with their friend, British agent Joshua Pinsmail (Eamon Farron), flee further into uncharted Mohawk territory, the pot really boils for both hunter and hunted, leading to a showdown best described as otherworldly.

Like Michael Winner’s Chato’s Land (1972), which also features a ruthless posse chasing an American Indian (Charles Bronson, no less), it’s the white guys in charge who prove to be the real savages, even as the reluctant grunts quake in fear at the thought of being captured and tortured by natives.

The ironic subtext about the dangers of immigration is on-point timely, and shouldn’t be lost amongst the deft brutality and gripping vistas. These foreign invaders (a.k.a. Americans) are indeed a deplorable bunch, who think nothing of eradicating entire societies in its lust for land, money, and revenge.