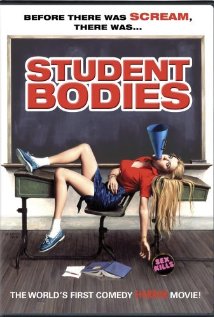 A maniac known as “The Breather” (he sounds like an obscene phone call—especially when he’s making obscene phone calls) stalks high school kids and waits until they’re getting ready to get it on before killing them off with a ludicrous assortment of weapons, including paper clips, an eggplant, an eraser, and a horse-head bookend. Toby the virgin tries her best to stop the fiend—who strikes during the homecoming parade, the big game, and the prom—but ends up as the prime suspect instead.

Student Bodies isn’t especially witty, but the sheer volume of schtick keeps it afloat, as it turns out the entire faculty, as well as the brain-damaged janitor, are all murderous psychopaths. No nudity or gore, but at one point, a man appears on screen who explains that “R” rated movies make more money. So he says “fuck you” to the audience. An interesting curiosity from decades past that’s at least as funny as anything from the Scary Movie franchise. Yeah, I know, faint praise indeed.