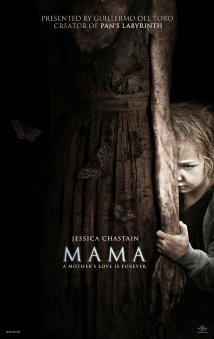 For the first three-quarters of Mama, I was absolutely transfixed. Executive producer Guillermo del Toro imbues the action with his trademark otherworldly finesse, though the overall feel of the film, courtesy of co-writer/director Andres Muschietti, seems more like Sam Raimi with a splash of Sleepy Hollow-era Tim Burton. It’s an eerie, heartfelt, and stylish fairy tale, featuring a fiercely maternal ghost that will probably be guest-starring in my nightmares for years to come. And yet the foot comes off the gas pedal when Muschietti endeavors to make the ghost more human, more of an actual character, toward the conclusion.

Mama opens with a bang as a deranged father (Nikolaj Coster-Waldau), fresh off a killing spree, snatches his two young daughters, Victoria (Megan Charpentier) and Lily (Isabelle Nelisse) and heads for tall timber. He drives off a snowy road, crashes the car, and herds his frightened children to an abandoned house in the woods. Five years later, the now-feral girls are discovered by hunters searching the wilderness in the employ of their Uncle Lucas (Coster-Waldau, again).

The girls are bathed and brought back to civilization under the watchful eye of Dr. Dreyfuss (Daniel Kash), and are given over to Lucas and his hot (though not particularly maternal) girlfriend Annabelle (Jessica Chastain) who plays bass in a Muffs-style pop-punk band. The question is, how did two young girls survive five years in the woods on their own? Answer: With the help of a madwoman’s ghost who leapt from a nearby cliff with her own baby more than a century before.

Really, Mama is one of the most impressive “ghost” movies I’ve seen in years. The ending drags a bit, and the vengeful spirit becomes less awesome the more we see of her, but these are minor quibbles. Drop your knitting and get on it; you just might discover (as I did) that this is the sort of thoughtful, wondrous, and best of all, frightening, ghost story that you’ve been hankering for.