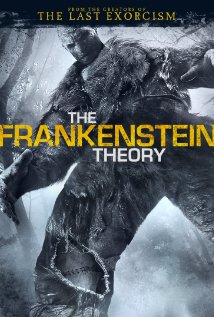 The Frankenstein Theory is a well-made addition to the monster’s cinematic pantheon.

It’s The Blair Witch Project set in the Yukon and the tension build is exquisite. Sure, there’s no monster and no killing for most of the movie’s 86-minute running time, but the slow changes that occur, the gathering darkness that descends on a hapless film crew in search of the legendary Frankenstein’s monster is expertly handled by writer-director Andrew Weiner.

Brainiac scientist Jonathan Venkenhein (Kris Lemche, who is excellent) enlists filmmaker Heather Stephens (Vicky Stephens) and her three-man documentary crew to follow him to the Arctic Circle in search of Frankenstein’s monster, a fictional construct that Venkenhein believes to be flesh and blood.

He produces letters, maps, drawings, and all sorts of theoretical evidence that gets laughed off by the film crew and the team’s hardboiled guide (Timothy V. Murphy), but as they move closer to the frozen heart of nowhere, they begin to realize that there might be something to this mad doctor’s hypothesis after all.

The Frankenstein Theory is a slow turn of the screw, but worth your patience. Action fans might be distressed by the lack of a towering body count, but in doling out the frights in small measures, Weiner makes the anticipation of a showdown worth savoring.

As with most mockumentary/found footage features, there are improbable scenes of “anonymous” camera work (i.e., “Hey, who’s supposed to be shooting this sequence?”) that stretch credulity to the breaking point, but I’m going to let it pass.

Hell, I would watch this again, and that’s something you don’t hear me say very often.