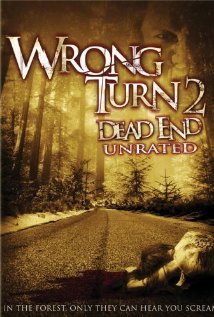 On the scariness scale, if you stack Wrong Turn up against The Hills Have Eyes, I’ll take Wrong Turn every time.

Granted, it’s a close call, but I find the isolation of backwoods West Virginia to be more sinister and oppressive than the stony desert of the American Southwest. At least the latter is open country so it’s more difficult to be taken by surprise.

In the dense vegetation of the forest primeval, bad shit could be hiding anywhere—and probably is. Plus the deft artistry of monster makeup maestro Stan Winston in Wrong Turn is impossible to top.

As far as sequels go, Wrong Turn 2, while not up to the original, is pretty fun. Like Texas Chainsaw 2, this one plays it for gruesome laughs, as the story concerns the pilot for a reality show called Ultimate Survivalist.

But of all the boonies in all the world, they had to pick the stomping grounds of deformed, inbred cannibal hillbillies. Oh, is that the dinner bell?

As I alluded earlier, the makeup effects are merely competent in Wrong Turn 2, but that’s to be expected without the presence of Winston.

Also in the “tsk tsk” column is a needlessly determined effort by writers Turi Meyer and Al Septien to add “color” to the script by including a relationship subplot between plucky producer Mara Stone (Aleksa Palladino) and doofus director “M” (Matthew Currie Holmes) that has fuck-all to do with anything.

Even so, director Joe Lynch keeps the ball rolling, the blood flowing, and doomed campers fleeing like bunnies through the bush.

And to give credit where it’s due, Meyer and Septien serve up an ace in their depiction of the monstrous (though eerily familiar) cannibal clan, who provide us with a domestic tableau that’s not only a dead-on tribute to Texas Chainsaw Massacre (specifically the dinner table sequence), but also bloody revolting in its own right.

Is Wrong Turn 2 any more grotesque than say, Honey Boo Boo, or that awful TV family who seem to spawn every other month? Really, I couldn’t say, but I probably would tune in to a show about the daily adventures of this particular pack of deformed, inbred cannibal hillbillies. Coming next season to TLC…