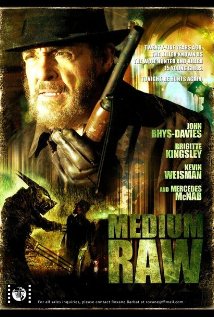 Unless your name is Orson Welles, a single person taking on all the primary tasks associated with filmmaking usually turns into a shit show.

Writer-director-star Andrew Cymek shows sufficient promise while wearing 20 hats at once that I’ll give him the benefit of a doubt, but this is a ragged effort as befits one man and a microscopic budget.

Cymek stars as Johnny Morgan, a troubled cop who’s still haunted by the childhood memory of his sister’s abduction by a heinous serial killer known as “The Big Bad Wolf.” Though the killer has been dormant, a recurrence of his modus operandi several years later puts Morgan on the case with a chance to even the score.

Morgan succeeds in capturing the Wolf (Greg Dunham), who is then ensconced in a nearby home for the criminally insane where his va-va-voom girlfriend Jamie (Brigitte Kingsley) works as a psychiatrist.

Also in the loop is the Wolf’s lawyer (Mercedes McNab, from Buffy and Angel), the sinister asylum director Dr. Robert Parker (William B. Davis, the cigarette-smoking man from X-Files), and a colorful assortment of deranged inmates. One night, the power goes out and, sure enough, the patients are soon revolting.

There are a number of wayward plot points that remain unaddressed. What happens to Mr. Jacobs, the gigantic madman who turns insanely violent when he sees the color red? The movie ends with him still on the loose.

Why is there a nine-year-old girl wandering around in a nuthouse filled with cannibals, criminals, perverts, and killers?

To his credit, Cymek manages to keep enough balls in the air to maintain a respectable interest level throughout, and his conception of the insidious Wolf is fairly inspired.

Fans of actor John Rhys-Davies, who gets top billing here, should be emotionally prepared for his speedy exit.