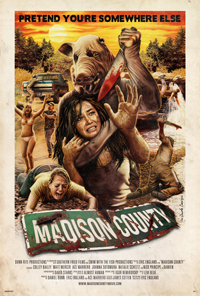 In this critic’s opinion, there are entirely too many films coming down the pipe that ignore not only fundamental rules of genre movie making, but in basic storytelling, as well.

Take Madison County, for example. For the first 45 minutes we’re treated to an exhaustive and tedious overview of the hearts and minds of the soon-to-be dead collegiate protagonists. Is James going to “hook up” with Jenna? What happens when angry older brother Kyle figures out that wiseguy Will is boning his sister Brooke? Is Brooke going to leave Will to attend grad school?

Not to put too fine a point on it, but we don’t give a shit, and never will. Writer-director Eric England should be reminded that less is more: less yack-yack-yack, and more whack-whack-whack.

But that’s a far too uncomplicated mission to be of any real interest, so England fills out the party with Will’s girlfriend Brooke (Joanna Sotomura), Brooke’s seething older brother Kyle (Ace Marrero) and her friend Jenna (Natalie Scheetz), and for nearly an hour the principles behave as though they’re characters in a romantic comedy that’s dreadfully unfunny.

And it’s for this reason I can’t recommend Madison County. (Can you tell I’ve been watching a lot of Chopped, lately?)

The news isn’t all bad. Madison County features a compelling psycho in the person of Damian Ewell, a relentless abomination who scampers about the boondocks wearing a darling hand-stitched cloth pig head. He’s portrayed by the formidable Nick Principe, who plays a similarly hostile guy in the Laid To Rest films, though this version is a deranged, brain-damaged hillbilly who likes to carve up nosy college students. And really, why should it be about anything else?

Look, I realize that there must be actual characters in horror movies, so that we can better keep track of who’s getting gutted at the moment, but for pity’s sake! We don’t need their life stories! When considering character development in a horror movie, let’s hearken to the model provided by the original Texas Chainsaw Massacre.

In other words, get ’em on, and kill ’em off. This isn’t Chekhov. Managing fewer storylines leaves more time for madness and carnage. And that’s what we’re here for, right?