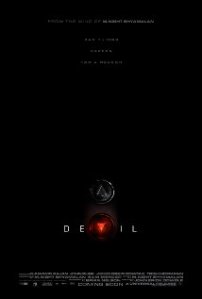 I missed the memo on why exactly M. Night Shyamalan is now considered such a lame-o. I didn’t see Lady in the Water and I started to watch The Happening but bailed out for some mundane reason unrelated to the quality of the film.

So what happened? Did these two movies suck so unbelievably badly that they reduced the Shyamalan brand to a punch line? And now I’ve built up such a load of anxiety that I can’t bring myself to watch them.

I didn’t realize Devil was co-written and produced by Shyamalan or I might have steered clear, but I’m reasonably glad that I didn’t. Sure, it’s rife with his trademark glib spirituality (or Old Testament as folklore) with a side dish of “you just gotta believe sometimes.”

Even so, it’s a modestly effective thriller about five people trapped in an elevator—one of whom might be Lucifer.

Taking place in a thoroughly modern skyscraper in a thoroughly modern metropolis, five seemingly unrelated people get into an elevator car and become trapped between floors. A dramatic storm sent by obviously sinister forces moves into the area and messes with the electrical system, so getting them out proves complicated.

Detective Bowden (Chris Messina) is the cop on the scene who attempts to organize their rescue, with some help from Ramirez (Jacob Vargas), a particularly devout building security guard who doesn’t like what he’s seeing on the video monitor from the stranded elevator.

Devil offers legitimately frightening scenes as the trapped characters begin freaking out from the steadily increasing paranoia, claustrophobia, and growing suspicion that one among them is not what he/she seems.

More than just a morality play (although there are similarities), the story hangs on a basic Twilight Zone premise that Satan is real, and that from time to time he likes to go out amongst the people in the guise of a particularly unpleasant collections agent.

Seriously, if you’re on this list, you have very few options.