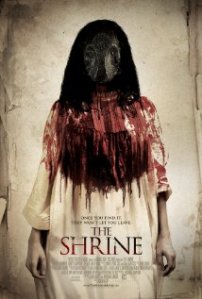 Imagine my surprise and color me impressed: this gritty Canadian feature kind of rocks.

You keep thinking you know “what kind” of movie you’re watching, and then suddenly you don’t. The Shrine manages the difficult trick of being able to switch gears without wrecking the engine.

It starts out as a warning to tourists against touring Eastern Europe without letting others know your whereabouts—because the worst will happen.

In this case, an American backpacker disappears in a small Polish town, which motivates a trio of journalists to investigate the enigmatic community, where such occurrences are all too common.

I might add that this is a grossly inaccurate portrayal of a journalist. Anyone still fortunate enough to work for a newspaper or magazine at this time is most decidedly not curious about anything—unless it’s figuring out how to hold onto a job that will soon be farmed out to interns.

Then comes the first shift, and now you’re watching one of those creepy Iron Curtain faux snuff films, and you consider getting up to water the plants.

But then Sam Raimi arrives and everything goes all Evil Dead. To conclude the festivities, we get a metaphysical mud-wrestling match, straight out of The Exorcist.

The Shrine works because it subverts our point of view so deftly that we don’t even realize that we should probably pick a side in this apocalyptic death match.

Not only that, but it succeeds in the way that (earlier reviewed film) Spiderhole failed—it provides us with a valid reason for scenes of squirm-inducing cruelty.

I swear, if you know that someone is being savaged as part of the plot, and not simply because we like the sound of screaming, it goes down a lot easier.

And now, a hearty round of applause for writer-director Jon Knautz, who did a superb job of juggling themes, tones, and terror. So tell us Jon: What’s next?