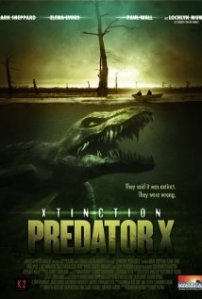 Ain’t no way to sugarcoat this shit pill: Alligator X (a.k.a. Xtinction: Predator X) sucks rope, and the fact that I made it all the way through is a modern-day miracle.

The giant prehistoric gator brought back to life by mildly mad scientist Charles LaBlanc (Mark Sheppard) generally appears as an underwater animation, so we’re left with the questionable dramatic talents of the actors as the primary means of propelling the plot.

Not to put too fine a point on it, but Sheriff Tim (Lochlyn Munro, a poor man’s David Arquette), Laura LeCrois (Elena Lyons), and Froggy (Paul Wall) are about as realistic and well drawn as the titular critter.

Some swell establishing footage of the bayou is thoroughly wasted as the principal characters alternately run from, and after, a “pleasaur” resurrected by Dr. LeBlanc.

Why he wants a monstrous gator for a pet is anyone’s guess, but it sure comes in handy for eating people that piss him off, such as Pappy LeCrois (Phillip Beard), who owns a swamp tour business on property that LeBlanc covets—for some reason.

Pappy’s daughter Laura watches in horror as LeBlanc’s redneck accomplices ring the dinner bell and toss her pops into the juicy jaws of fate. Meanwhile, Sheriff Tim is trapped (for a really long time) on a pylon out in the bayou, after the gator chomps up the boat driven by Pappy’s Cajun employee Froggy, who somehow doesn’t get eaten and returns later in the movie as a bad guy.

Oh yeah, the sheriff has an idiot brother named Henry (Caleb Michaelson) who serves as his bumbling deputy, and later bleeds to death after getting shot by a swamp rat. There are some other characters too. They all die, mostly.

All you need to know about the craft and intelligence at work in Alligator X can be summed up by the final scene, in which Laura and Sheriff Tim casually tease and flirt with each other—less than 24 hours after she saw her daddy get chewed into chum, and about 20 minutes after the sheriff discovers the corpse of his younger brother.

Oh well, at least there’s a happy ending. I for one, was overjoyed to finally see it.