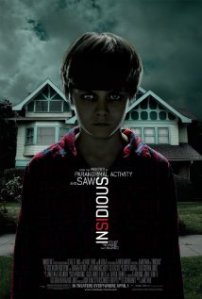 Right off the bat I was worried. The cover art proclaims, “From the makers of Paranormal Activity and Saw,” two films I didn’t much care for.

I thought the former was dull and the latter unbearably formulaic. So paddle my ass and call me Spanky—I rolled the dice and came up a winner with Insidious, a potent portrait of immaterial possession that belongs on the same domestic horror shelf as Poltergeist, The Exorcist, and The Grudge.

It isn’t as good as those films, but it’s good enough.

Teeny weeny actress Rose Byrne (Damages) is cast as Renai Lambert, a mother of three children. Byrne is totally spot-on here emotionally as the freaked-out-but-scrappy mom, but she looks like she’d shatter into gravel if she so much as contemplated child birth.

Patrick Wilson, a rather colorless fusion of Will Arnett, Robert Patrick, and Timothy Olyphant, is her husband Josh. As previously mentioned, they have three children.

The eldest, Dalton (Ty Simpkins), is a fearless tyke with a hidden talent for astral projection during sleep. A stroke of bad luck comes when Dalton, instead of hanging out in the girls’ locker room like a sensible youngster, gets his dumb-astral form trapped in a very bad-astral place, and all sorts of extra-dimensional creatures start showing up to claim the lad’s comatose body.

After getting the beans scared out of her on repeated occasions, Renai finally prevails on her prick of a husband to move from their extremely nice early 20th century Craftsman-style home into another, equally beautiful home.

Editor’s note: Having gone through numerous hellish scenarios with contractors, realtors, and movers, the Lamberts emerge from this part of the deal relatively unscathe). It’s only after the move that they find out, as the tag line declares, “It isn’t the house that’s haunted.”

I got a kick out of Insidious. The scares, though predictable, are fairly intense and original. There’s some surprisingly unannoying comedy relief in Specs (writer Leigh Wannell) and Tucker (Angus Sampson), a Mutt-and-Jeff team of nerdy ghost busters who quickly realize they’re in over their heads.

And veteran character actress Lin Shaye (Kingpin, There’s Something About Mary) does yeoman work as a capable psychic brought in by Josh’s mom Lorraine (Barbara Hershey, always a pleasure).

The ghosts, lost souls, and demons that materialize during the 103-minute run time are mostly frightening, and, more importantly, memorable.

Alone in the house, on a dark night, Insidious could well set your pants afloat.