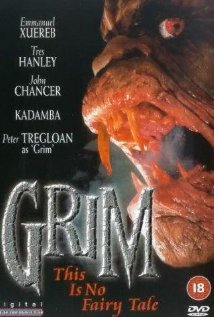 Nutshell: Rob (Emmanuel Xuereb—he’s good in anything!) is a mining expert inspecting a series of tunnels and caves under a housing in development in “Virginia” (actually, Coleford, Gloucestershire) where folks have been disappearing. He and a bunch of concerned homeowners go spelunking into the bowels of the earth and are set upon by a magic troll-like being who can walk through walls.

The creature (Peter Tregloan) is the best thing about this SPoS—a toothy brute who bites and kills some of his victims, while others are imprisoned, presumably to be scarfed at a future date. By the way, the monster is initially summoned by some bored New Age suburbanites playing with a homemade Ouija board.

Grim is an idiotic film, but it’s the right kind of idiotic, as writer-director Paul Matthews leaves plenty of lengthy silences in the script so viewers can hurl snarky comments with impunity (a perfect movie for MST3K-style riffing). The story also gets increasingly (and I would argue “winningly”) bizarre, contains a decent amount of bloodletting, and leads to a WTF finale, with a minor character helplessly snared in a completely FUBAR situation. Grim is an amusing time-waster with an OK monster—nothing more, nothing less.