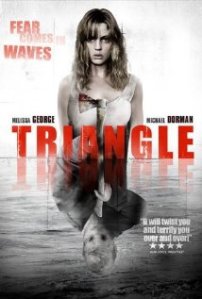 I have to say, Triangle is a nifty thriller—albeit one that’s more like a cruise through the Twilight Zone, rather than an in-your-face horror spectacle.

It’s a fairly compelling riff on the concept of converging realities, duover days, and a rip in the time/space continuum, that forces one woman to relive the events of one unfortunate afternoon in a seemingly endless loop.

H-o-t single mom Jess (Melissa George) climbs aboard a spacious sailboat with a bunch of reasonably attractive Australians pretending to be Americans (it’s supposedly set in Florida, but this is an Aussie production complete with slippery accents) for a weekend of pleasure boating.

Somehow they get blown off course by a freak storm and end up capsized. The waterlogged survivors scurry aboard a deserted ocean liner/Flying Dutchman that just happens to be steaming by, and the stage is set for something sinister.

Jess tries desperately to repair their fate, even as she and her friends are hopelessly caught up in a Moebius strip of action, while we gather up the clues that are dutifully dropped by writer/director Christopher Smith.

Lines of dialogue are repeated throughout, as multiple versions of Jess look on from different perspectives each time she rewinds back to their boarding of the ghost ship.

Hint: The myth of Sisyphus is discussed briefly.

Triangle is another film that suffers from a slight case of the wanders (i.e., characters spend far too much time poking around like tourists in an antique mall), but even so, it’s an effective piece of genre entertainment, in which the Groundhog’s Day rules of reality result in the cast being murdered several times in various ways.

Saving money on the number of actors that need to be paid by having them slaughtered over and over, makes good economic sense—and helps shape a subtly scary seafaring saga, as poor Jess comes to the slow realization that she’s been running around this damned ship for a helluva long time.

And there’s not even a shuffleboard court or a wave pool.